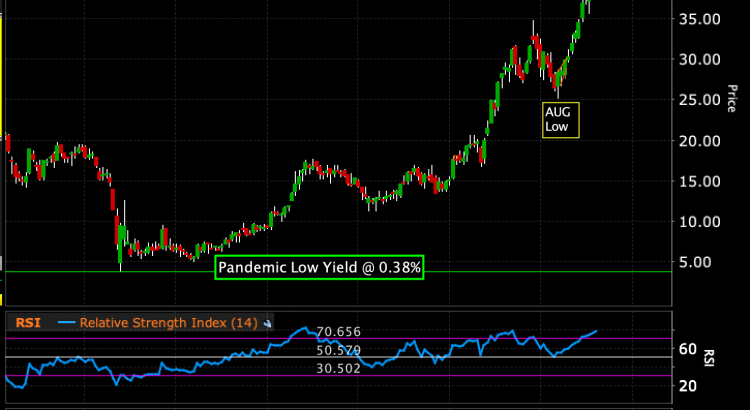 This week we had many Fed Governors giving speeches warning of multiple rate increases, however, the message flipped on Friday. Nick Timiraos, a reporter at the Wall Street Journal (WSJ) who is known to be the reporter used by the Fed to float policy changes, wrote that 75 basis points would be the raise in November and then perhaps a slower pace in December.

I wouldn’t be surprised if there is a modification to the approach as the strong dollar wreaks havoc in overseas economies and I am sure politicians and foreign central banks are lobbying the Fed behind the scenes to make a pivot. Inflation will be with us for some time so the hawkish policies are not going anywhere if the Fed is serious about stomping out inflation. And let’s not forget that tapping the brakes on rate increases doesn’t mean the Fed stops reducing their balance sheet by $95B monthly. SO, maybe there is a rebalancing act with less rate increases and continued balance sheet reductions into 2023.

And there is consideration that the the mid-term elections are in a couple of weeks so that makes me think that this article was planted to calm markets and the the Fed out of the crosshairs of Congress.

This chart below may be what is making the Fed nervous. The rate of change in 10Yr yields has been historic and puts the brakes on real estate markets and financing for public corporations. Not to mention the amount of paper losses in the bond market are becoming enormous.

Rising Across All Tenors

Abrupt increases in shorter term interest rates also affect consumers with auto loans and credit card APRs. Earnings from American Express on Friday showed that the company was taking higher loan loss reserves against their credit card portfolio so lenders have an expectation that consumers will be strained in the coming months.

Hundreds of companies will report next week so we will have a good look at what is going on with the economy and below are the notables:

Friday: ExxonMobil, Chevron along with pharmaceutical firms Sanofi and AbbVie.

Below is the chart of the S&P 500 futures with the various events that have marked the price action since August. We have been trading in a range since mid-September and the rise on Friday was a push to the top end of the range. There is resistance at the 38.2% FIB at 3806 so maybe that gets re-tested next week if the earnings reports are received well by the market. A move above 4000 would look like a bottom is forming and maybe that happens if the Fed blinks like they did in 2018.