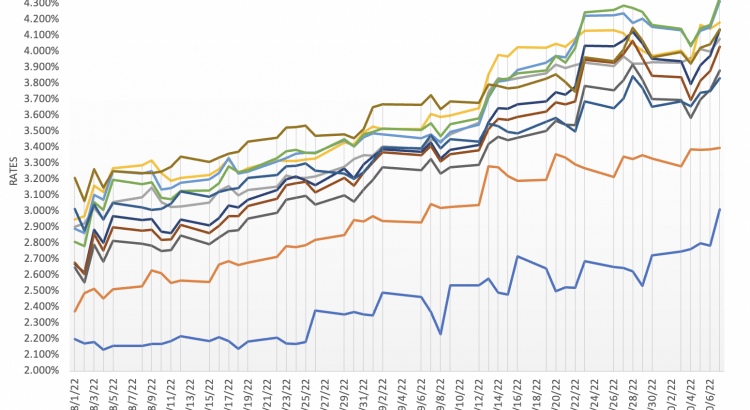 There was quite a bit of price action this week as the stock market rallied over 6% from Monday to a high on Wednesday that reversed course after the Non-Farm Payroll (NFP) report on Friday (more below). There was hope in the mainstream media that a weak jobs number would cause the Fed to pause in their rate hikes but to no avail as a better than expected number was reported (good for the economy). Not a coincidence that several Fed Governors were out making speeches this week with the message that inflation will persist for some time. In other words, rate increases will continue despite the fall in stock and bond prices. This realty came back into the fray on Friday as the S&P dropped 3% on Friday and giving back most of the gains this week. It is clear to me that the Fed will continue on this path until unemployment (reported at 3.5%) spikes and there is no evidence of that happening right now.

As you can see in the chart below, there have been a series of events that have pushed the stock market lower since the August high and on Friday I added a tag for the payroll report. We closed on the June low level around 3653 on Friday so that price continues to have technical significance as a support level. However, the momentum after the payroll report looked impulsive to the downside so I expect the downtrend will continue into next week. Breaking the previous low at 3572 would bring in the next wave of supply down to the next Fibonacci level at 3489.

The next shoe to drop is earnings and we have already seen reports from Nike, AMD (semiconductors) and FedEx that foreshadows earnings downgrades. Each company has commented that “something happened” in Q3 to cause them to guide lower as business went into low-gear over the summer. We will hear more about the economy next week as bank earnings kick-off the Q3 earnings season.

A growing risk in this market is the chart below which shows each tenor of the US Treasury yield curve. The meteoric rise in yields this year will catch some corporations as unprepared as debt costs rise and eat into their bottom line. Also, higher US rates forces other central banks to follow the Fed’s policies as the US dollar strengthens over foreign currencies.

Leveraged players also get taken out in body bags when shifting from an environment of low to high volatility. We already saw the first victims as the Bank of England bailed out some UK pensions funds last week. I expect that there could be more of these events in the coming months as sharp rate increases permeate through the global bond markets.