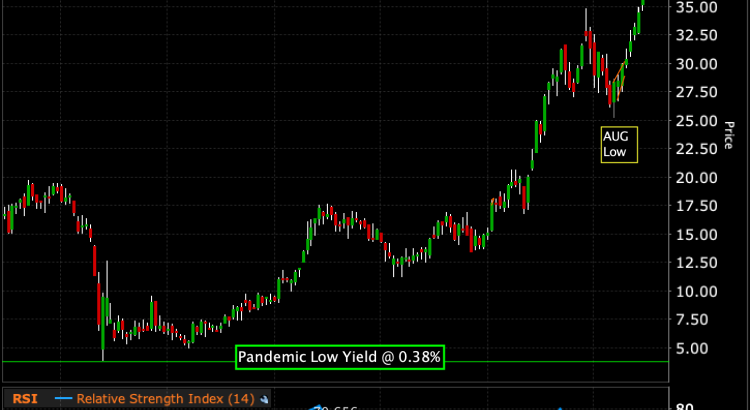 The Fed moved 75bps on Wednesday and put the stock and bond markets in the crosshairs as prices plummeted into the close on Friday. The kill-shot for the markets came in the form of projecting 4% Fed funds rate by the end of this year (according to their dot-plot) and that took the markets by surprise.

As you can see in the chart below of the S&P 500 Futures (includes overnight trading), the market has reacted negatively to the Powell speech in Jackson hole, the CPI release and now the Fed meeting on Wednesday. In all three cases there has been a sharp reaction as the Fed continues to emphasize their “resolve” in maintaining a hawkish policy stance.

The Fed is now reducing their balance sheet by $95B monthly to work off a balance that doubled during the pandemic to $8Trillion (a crazy amount). This divestiture combined with raising the Fed Funds rate is causing a re-set to asset prices. You can see the rate of change in 10Yr Treasury yields to the right. This is one of the fastest increases on record and is causing big losses in a relatively short period of time.

Higher interest rates CAN be tolerated but when the rate of change is this fast, consumers and companies have difficulty adjusting. For example, some debt is floating rate and companies that did not hedge their rate exposure this year will suffer earnings impairments as there is no time to adjust to soaring interest rate expenses. Consumers will bear the higher cost of higher monthly payments for credit cards, mortgages and automobile loans. Both will impair spending and in turn growth in the economy so a recession is looming.

Not to mention that overseas earnings from the international companies will now be subject to currency losses. We saw a dramatic move in currencies on Friday after the Euro dropped 1.54% and the British Pound fell 3.59%. For reference, a 0.5% move in a day is typically considered significant as currencies normally move slowly.

In the chart below you can see an example of the EURO vs the US Dollar which has been in a downtrend since the high in 2008. However, the EURO topped in January at the same time as the S&P 500 and now is trading below parity which means a trip to Europe continues to cheapen.

The Bigger Picture – Return to Sender

As rates move higher it becomes harder to make outsized earnings for companies as new challenges appear that never existed under the period of quantitative easing (QE) that began in 2008 and ended in 2022. Currency differentials, interest costs, tight labor, inflation and supply chain issues add up to a recessionary environment that should last into 2023.

If we look at the chart of the S&P 500 from the pandemic low, the decline from the January high looks like a return to sender (pandemic low) is underway. We came close on Friday to breaking the June low so unless a massive double bottom is going to happen next week I think the S&P will eventually get to the bottom of this chart.

In either case, the market is now left to its own devices until earnings season next month and the momentum is now to the downside.

Many central banks moved after the Fed this week so it is not a surprise that stocks and bonds are dramatically re-pricing. I have all of the central bank actions that happened this week below as the other economic data this week is a footnote now: