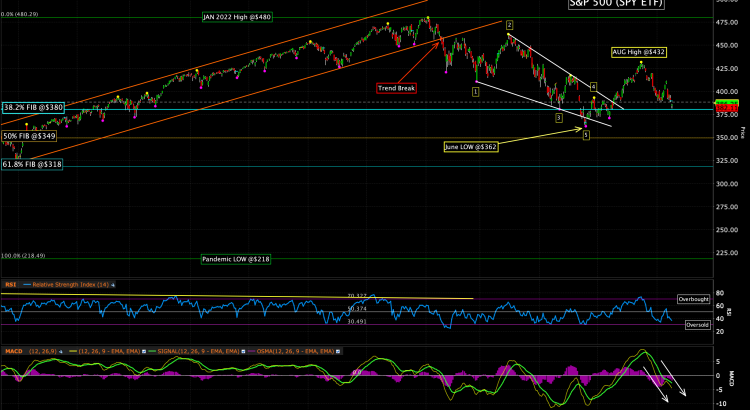 A big week on Wall Street as the inflation data (CPI & PPI – more below) dispelled any notion that the Fed will be tapping the brakes on rate hikes at their next policy statement on Wednesday. Some of the Fed Funds Futures were incorporating some probability of a 100bps move this week but I think 75bps will be the number and there is likely to be stronger language on future rate moves.

Below is a chart of the S&P futures that show the reaction to the CPI report on Tuesday that was released at 8:30AM in the pre-market. It was pretty clear that the market did not like the data as “peak inflation” may take more effort to extinguish. The price action to close the week was also poor and a break of the 3900 area implies the June low at 3650 will be re-tested (at least).

The third quarter is also shaping up to be a disappointment as companies are making pre-announcements with bad news. Eastman Chemical, Nucor and Alcoa have downgraded their outlook as demand destruction from higher rates is filtering through the global economy. However, the big news came on Thursday from FedEx that delivered their earnings a week early and reported that EPS came in at $3.44 vs $5.14 expected. The CEO said that their expectations are now for a global recession and are taking aggressive cost reduction efforts, including cutting CAPEX by $500 million. The company is also closing 95 office locations and will be deferring hiring. Will more companies follow their lead into 2023?

The earnings headwinds for Q3 are piling up and come from a very strong dollar, increasing labor costs, demand destruction from rising energy costs and central banks sucking liquidity out of the capital markets.

A Strong Dollar Could Bring Out Sellers

This is especially tempting to countries like Japan who have suffered a massive devaluation as they hold interest rates near zero. Now the dollar is worth 25% more in yen than it was at the beginning of the year, lifting the value of the fund’s assets. Selling some of those dollar denominated investments could allow the government to boost the yen and counter the currency’s depreciation.

And this could mean the next wave of sellers is manufactured from currency differentials. This relationship has the potential to create liquidity gaps in the stock market – like we saw with FedEx on Friday. Many foreign central banks and sovereign pension funds have large holdings in US stocks and bonds so it could get ugly if they all try exit within a short period of time.

The chart below is of the S&P 500 ETF (SPY) that shows the top in January. The move down to the June low may be only the first wave down so the rally to August at $432 was counter-trend which means new lows for 2022 may be on tap over the next few weeks.

One major thing that happened in the bond market this week was that the Fed has discontinued purchases of Mortgage Backed Securities (MBS). The rationale for buying MBS came about during the financial crisis to help re-inflate home prices now this process is working in reverse. The Fed will have to outright sell these securities if they want to reduce their exposure as maturities go out 30 years.

The graph below shows what the US Treasury yield curve has been doing since August 1st and you can see the bond market is pricing in more rate increases by the Fed. Notable is the 1YR tenor which is now touching 4%. This is a big move in a short amount of time and it will have repercussions for the high-yield bond market and companies that carry floating rate debt.

Bond investors tend to be pretty good at pricing in risk as the high-yield bond ETF (HYG) below topped one year ago. Higher rates will be an issue for this sector in 2023.