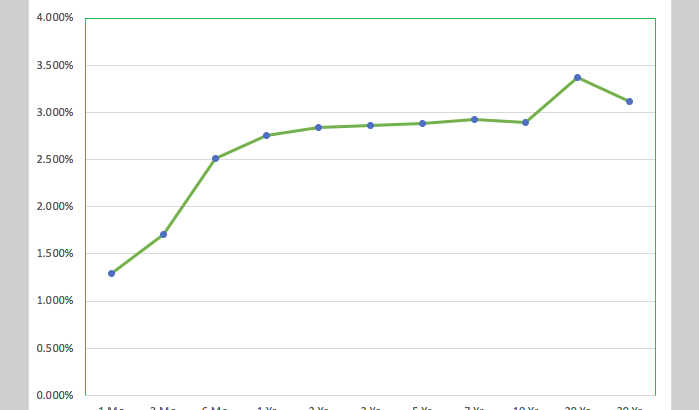 Everything is bent right now. The supply chain is still clogged and the few companies that reported this week are predicting the supply chain will be challenging through 2023. Earnings reports will begin en masse after the July 4th holiday but the early color from CEOs is that economic activity dropped off towards the end of June.

U.S. yields have been falling in a flight to better quality as the European Central Bank will begin raising rates in the coming weeks. The Fed also meets on July 27th where they will raise another 75bps and you can see the yield curve is kinked on both ends which probably won’t last much longer. The next rate move has the potential to invert the curve as that puts the Fed Funds rate at 2.5%. Combine that with an overseas bid and a recession being priced into the market the yield curve could have a proper inversion this summer.

The S&P 500 had its worst 1st-half since 1970 and we have yet to see a waterfall decline typical in a bear market. Will that happen next? Another good indicator of uncertainty is the U.S. Dollar which is at levels not seen since 2002 – the dollar is regarded as a flight to quality asset. If the dollar weakens due to overseas central banks raising rates, that would be good for precious metals and bad for U.S. stocks so that may be the next chapter for 2022.

In the chart below, we can see the S&P has yet to show signs of breaking the downtrend. Oversold levels on this weekly chart have been achieved but the MACD momentum indicator will continue to point lower until there is a sustained rebound in price.

There was a nice rebound on Friday but there is a lot of news swirling around with overseas central banks, currency volatility and widening credit spreads. Earnings reports in July will be very important to watch as CEOs are giving good color on economic activity and the progress of the supply chain (not good, so far). Also, agricultural concerns are building as farmers warn that wheat crops harvested at the end of the summer will not be enough to fill global demand. There will be a lot to digest in the upcoming month so stay tuned!

As a result of the Russian invasion of Ukraine on February 24, the prices of many of the commodities in question have risen sharply. This is particularly the case for coal and wheat, whose prices increased between 60 percent and 70 percent on average.