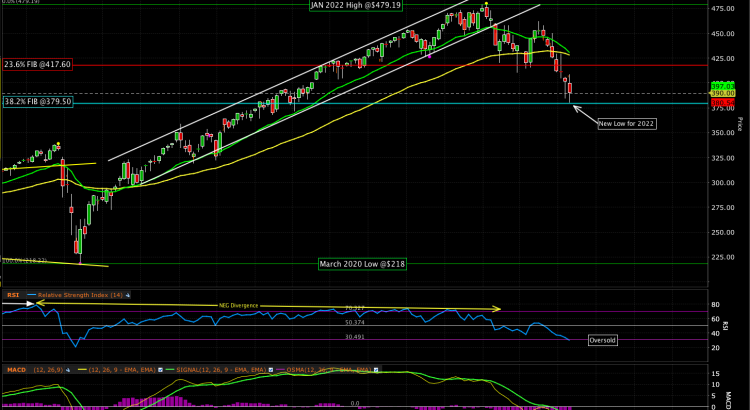 The bear market of 2022 made new lows on the year this week as the market re-prices to quantitative tightening where market multiples contract and growth looks challenged. The effects of inflation are also showing up in profit margins of retailers as they have been unable to pass-through cost increases which ultimately may affect sales in the coming quarters as consumers save for essentials like food and gas.

No Place To Go

I see some economists and investors make projections on Fed policy and the typical thought is that interest rate increases will lead to a recession and then we are back to a dovish policy. The Fed did reverse a hawkish policy in 2018 only to reverse themselves a few months later. However, this was a voluntary attempt at normalizing policy that failed when the high-yield bond market couldn’t issue bonds anymore so the Fed reversed course. In this environment, inflation has painted them into a corner and the oversupply of pandemic stimulus leaves them little choice but to stay the hawkish course.

If you look at the chart to the right you can see the byproduct of trillions of stimulus provided by central banks across the globe due to the pandemic. Eventually, inflation rears its ugly head but this time it is uniform across the major economies. Not in the chart is Japan which printed a 2% CPI number – the highest since 2008.

What this means is that central bank policies will converge to quantitative tightening to combat inflation. This process is just getting started as the Fed’s balance sheet reduction does not get going in earnest until the Fall and the EuroZone has yet to begin its program. So, this process looks like it will take years to play out as central banks will not be acting in unison until later this year.

One step at a time when it comes to the equity market. This week the S&P finally tapped the 38.2% retracement and we got a nice rally into the close which was related to options expiration on Friday. This rally could carry into next week but I think we eventually work lower on this chart as more central banks come on-line with their tightening policies. The technicals show an oversold condition now exists but a sharp reversal is needed soon to stop the downside momentum.