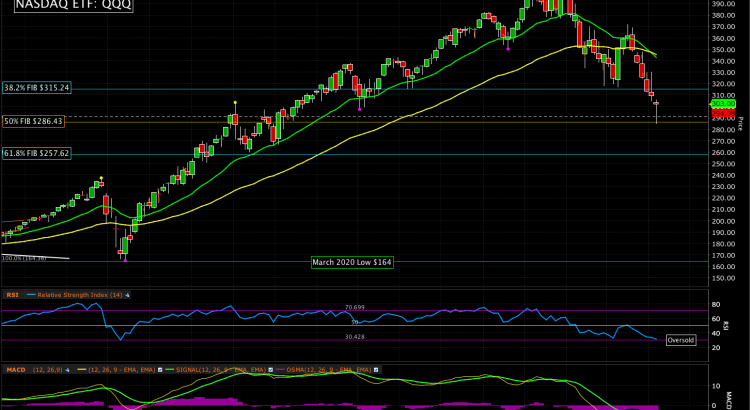 The stock markets have now closed lower for the sixth Friday in a row, however, there was a reprieve on Friday which gives a glimmer of hope for a good open on Monday. Plus, next Friday is monthly options expiration (OPEX) for May and many times these weeks close out on a positive note as traders trim out their book with their options positions.

However, if we check in on the weekly chart of the S&P 500 we can see a closing price well above the low of the week. Ultimately, I think a more sustainable bottom would be built after hitting the 38.2% FIB and finally pushing the RSI on the bottom of the chart into oversold territory. Overall, there are many oversold readings and many stocks that have crashed over the last several weeks so a rebound is overdue.

If we move on to the NASDAQ (QQQ ETF) we can see this index has retreated farther than the S&P as it tagged the 50% FIB at the low of this week. However, we can also see that an oversold condition has yet to be created as seen at the pandemic low in March of 2020. Not a requirement but it would be a cleaner bottom with a cathartic whoosh to the downside and then a rebound (not yet).

If we are in the early days of a true bear market then there is a lot more downside to go for the stock market. Most bear markets can last 18-24 months and give up many years of gains during this period. The cause today are the tightening policies of central banks around the globe as inflation leaves no option other than to raise interest rates above the rate of inflation. For the stock market, this means that multiples will contract until the Fed gets inflation under control. For reference, the P/E multiple is now 20 on the S&P 500 and the long-term average is 16 so that may be where we are heading.

Quantitative tightening is happening all around the globe and stock prices are beginning to reflect these restrictive policies.