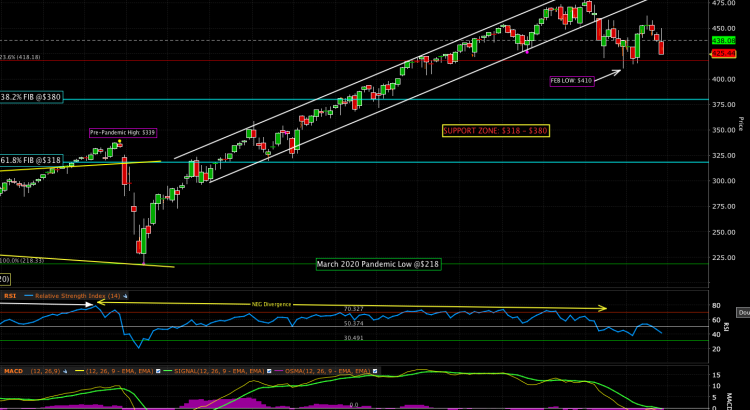 An ugly close this week and a warning that a larger pullback may have started. There are a lot of cross-currents right now as a Fed meeting is 10 days away and earnings reports will be very heavy next week. Not to mention inflation, supply chain issues, interest rates, commodity prices and the labor markets. So, putting all that aside let’s look at the S&P short-term chart that I have presented in the last issue that shows a support zone after a 500 point rally from the bottom to the top of this chart.

The main thing in this chart is a failure of a bullish set-up. The S&P pulled back to a normal retracement level and pushed back through 4440 in what appeared to be a completion of a corrective pullback. On Thursday, the S&P gapped higher on the open and rolled over with an impulsive decline that pushed through the lower boundary of the support zone on Friday (far right on the chart below). The low of the week was at the close and that normally means the selling will continue into the next session. Very oversold on the RSI below but sometimes that gets pinned when a larger correction is underway.

Looking at a larger timeframe, I have the S&P 500 ETF below which has the same chart pattern (almost) of the S&P 500 futures (each bar represents one week here). As you can see, the RSI on this timeframe has yet to hit an oversold condition which means more downside is possible. Like the previous chart, there is a support zone from $380 down to $318 but first the S&P needs to break the February low at $410 for this scenario to be in play. That would mean a correction of 20-30% is possible now so there is certainly some cliff risk in the marketplace going into this week.

The uncertainty regarding the yield curve and Fed policy is creeping into the stock market as we saw in the S&P this week. It didn’t help that Fed Chair Powell was interviewed on Thursday and said that several increases were likely in 2022. Clearly, the Fed is realizing how far behind the curve they are and they will have to play catch-up to stomp out the inflationary pressures. If this policy is going to cause a contraction in the economy then the yield curve should invert in the coming weeks/months.

There is still a great deal of information to be digested from earnings reports. The first quarter still had an impact from COVID regarding labor but companies should be hiring and providing color on the supply chain. However, any shortages caused by the Ukraine invasion should be showing up in outlook and earnings projections for the next quarter which may throw a wet blanket on the post-pandemic recovery.