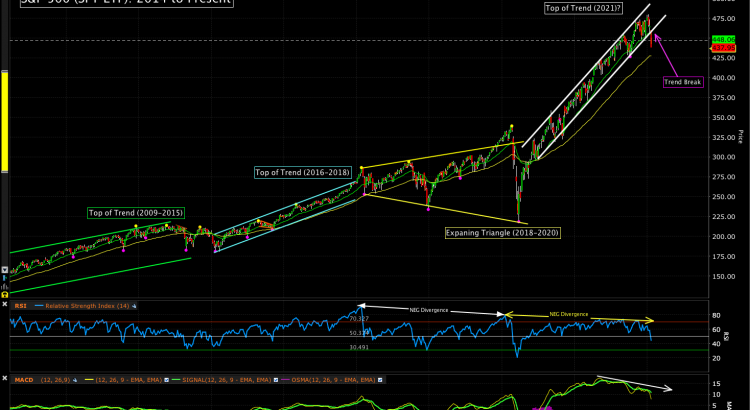 The Fed meeting is on Wednesday in one of the most anticipated announcements in many years. The elevated inflation levels are forcing the Fed’s hand in policy which means interest rates are going higher. However, the economy is not back to full power as supply chains and labor dislocations still exist as the last throes of the pandemic prevent a return to normalcy. Depending on the path of rate hikes, there is concern that the economy could slow down in response to the hawkish policy.

The Shape of the Yield Curve

If you trade bonds, you are more concerned about the shape of the yield curve then the absolute level of interest rates. If there is going to be strong growth and inflation than the right side of the graph below would be steeper and higher. In fact, there is an inversion in the 20/30Yr part of the curve which is serving as a warning that the curve may flatten which implies that the Fed’s policy shift will slow down growth and/or inflation. If we see an inversion through the 10Yr part of the curve then that would imply a contraction in the economy within 18 months. We are not there yet but the meeting this week should provide more insight into the path of rate increases over the next year and its implications for the shape of the yield curve.

There is a lot going on in the chart below since 2014 so I’ll break it down from left to right. The S&P 500 has seen two trending phases end in 2015 (green) and in 2018 (blue) that were characterized by low levels of volatility and a tightly defined trading range. The 2018 to 2020 period (yellow expanding triangle) was a highly volatile period with no trend and contained three double digit corrections with the final pandemic low and a fall of 35% from the pre-pandemic high. The kick-off since the 2020 low was marked by trillions in government and central bank stimulus which brings us to the current vertical trend (white lines) that is now breaking this past week. A trend-break of this magnitude implies many weeks of difficult trading for the stock market.

On the bottom of the chart are the momentum indicators – RSI or Relative Strength Index and MACD. The MACD is pretty straightforward to read (now declining) and it peaked in May of 2021. This shows a weakening uptrend since that time and now it is accelerating to the downside. The RSI indicator shows two negative divergences going all the way back to the peak in January of 2018 – the last high in this chart! If you follow the RSI to the right you will see this indicator continue to decline since the pre-pandemic high. These indicators are on a long-term timeframes so they don’t easily turn direction so a downtrend in the S&P may just be starting. Eventually, these indicators will push into oversold territory and indicate a bottom, however, that would imply a substantial decline in the S&P.