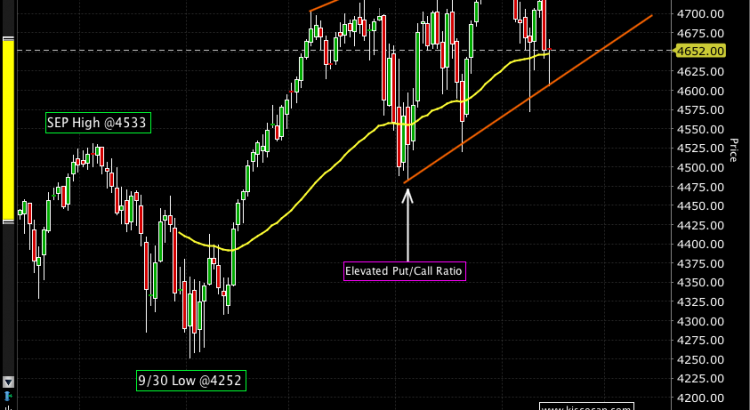 The next two weeks will be about earnings and the Fed. As you all know, the Fed will be raising interest rates this year to stem price increases as the CPI (+7%) and PPI (+9.7%) inflation readings leave no choice for a hawkish stance. The stock markets have been moving higher but thinning out as leadership narrows and valuations are now in question as the Fed removes the QE punchbowl.

As you can see in the chart below, the month of October was the last time period of consistent gains since the summer. Since then, the S&P has wedged into a diagonal pattern that could top later this month and give way to several weeks of a corrective pullback. Also, the technicals in the options market signaled a very high level of pessimism as evidenced by a high put/call ratio which we have not since the low on 12/3 – a contra indicator that signals a potential reversal higher on Monday. If this all plays out as I have outlined, equities could rally into new highs right around the Fed meeting and then reverse to the downside to close out January. A downside projection would be somewhere near the bottom of this chart by late Spring which could re-set valuations to more attractive levels. Stay tuned!

With consumer interest in electric vehicles increasing, the global market for EV batteries has grown to the size of $27 billion in 2021 and is expected to continue expanding. (Statistica)