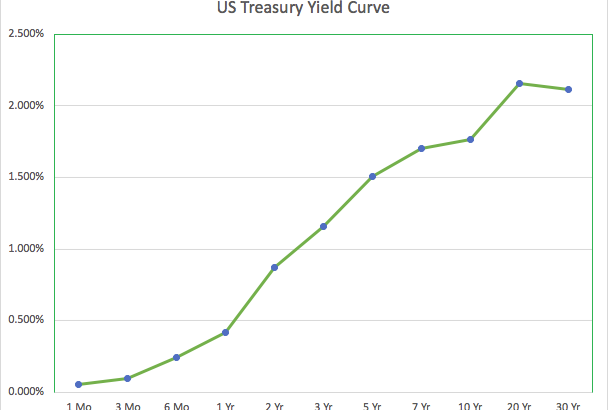 This year will be about the interplay between stocks and rising bond yields and we are off to a good start. Inflation has forced the Fed’s hand as the benign 2% inflation environment we had over the last 10+ years is now gone. If you look back at the last 50 years, there has only been one year (1973) where the stock market did not have a positive return during a Fed tightening cycle. Rising rates don’t end bull markets as credit cycles are typically the culprit but valuations are something to consider in this environment.

The yield curve is steepest between 1-5yrs so the fixed income market is already pricing in rate increases by the Fed. This means dislocations are unlikely, however, the long-end of the curve does have a slight inversion and could flatten this year which means these high inflation levels will cool off eventually. By the way, if the curve did fully invert on the long-end, that would signal the odds of an economic contraction are rising but that is not the signal I am seeing right now.

I am watching the 5Yr tenor most closely as it tends to lead the front-end of the curve. As you can see, this tenor was trading over 3% during the Fed’s previous attempt in raising interest rates but backed off later that year. Suddenly, 2% on the five year does not seem far-fetched.

One thing to consider about the indices is that leadership is thinning as 40% of the NASDAQ stocks are down 50% from the previous high and the S&P has about a third of its holdings trading below their respective 200-day moving averages. So, one could argue that many stocks have already been correcting for months in anticipation of a rising interest rate environment. The rotation among several sectors has propped up the S&P into new highs over the last six months so a larger corrective move is likely brewing.

The Fed has its next meeting on January 26th so maybe a corrective move happens later this month. Expectations are that the Fed will make its first rate hike in the March meeting but it wouldn’t surprise me to see that happen later this month as it is long overdue. If we look at the chart below, the most recent reversal was on Wednesday after the Fed minutes from the last meeting were released.

The pullback that started on Wednesday did change the technical pattern from an impulsive advance to a diagonal which is a terminating pattern and warns of a corrective move coming up after one more new high. A bottom would likely form about 8-10% lower from the 4800+ area if that projection came to fruition. It is possible that the S&P already topped but that is not my base case right now as there are some positive divergences in the short-term technicals and volatility remained relatively subdued. I have seen markets top/bottom around Fed meetings so the real question will be what happens leading up to that meeting later this month.

According tothe International Robotics Federation, Asia leads the way in the shift to automated processes, with China in particular installing industrial robots at a breakneck speed. In 2020, China installed 168,400 industrial robots, amounting to 44% of global installations.