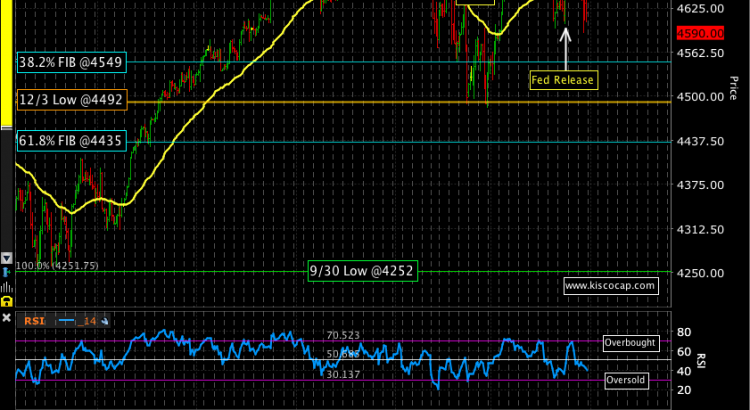 The Fed made a soft pivot in their policy this week as they will continue to expand their balance sheet for a few more months and begin to raise interest rates 2-3x sometime early in 2022. However, they will likely change this policy again if inflation remains at these elevated levels so stay tuned on the pace of rate increases. Central banks around the world are already tightening their policies so the Fed is behind the pack in this regard.

The S&P 500 rallied in reaction to the Fed news and made a new high in an overnight session which was then rejected in the cash session causing a breakout failure. The selling continued into the Friday close and it looks like additional downside is in store for next week. In the chart below, it is reasonable to say that the S&P could revisit the low on 12/3 at 4492 or even down to the 61.8% FIB at 4435 (roughly 3-4% lower from the close).

I always find it is good to know how far the markets trade from their previous peak, so here we are:

Interesting to see the indices have paired off from the last high but the under-performer is the Russell 2000 which is not far from going red on the year. Clearly, the indices have weakened in anticipation of the Fed’s policy change. And let’s not forget the last attempt to withdraw stimulus by Jerome Powell in Q3 of 2018 caused the junk bond markets to lock-up and double digit drawdowns in all of the major indices.

The economy is recovering but there are still headwinds with supply chains and the labor market and central banks have no choice but to stem the tide of inflation. How markets hold up in the coming weeks should set the tone for the first half of 2022.