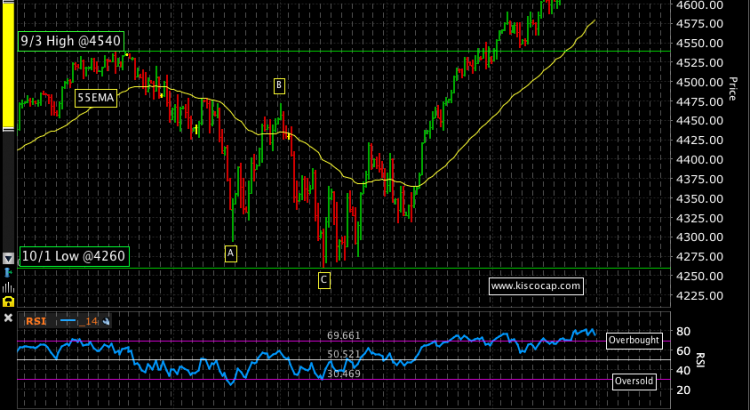 We passed some significant hurdles this week. The Fed is reversing (lightly) their bond purchasing program by tapering their bond purchases by $15B monthly but will retain the size of their balance thereafter – not a big change which was well received by the capital markets. Also, the monthly payroll report for October showed Americans getting back to work after being on an extended pandemic relief package that expired in September. Hopefully, this will allow companies to get back to full staff in the coming months and begin to heal supply chains as shortages still exist within the economy. Earnings season is also coming to a close and most companies are making decent numbers despite the challenges in a post-pandemic economy. The uncertainty surrounding Q4 is abating and another good jobs number for this month should solidify the picture for 2022. One wildcard is inflation and its interplay with Fed policy but a recovery in the supply chain will taper shortages and put a cap on inflation – that is likely the story to watch for 2022.

The stock market is driven by liquidity these days and the Fed’s tapering policy will still leave a massive balance sheet in place to support the capital markets. Combined with a very good jobs report, the S&P continued pushing higher into the close on Friday and tagged an extension (think of it as an echo) of the corrective pullback experienced in September at 4713. The uptrend looks to be picking up pace as the Russell 2000 broke out of a nine month range this week so the growth names could carry us through the holiday season and into Q1. The next overhead extension is around 4900 in the S&P so that will be the next target if we begin to close above 4713.

Governments in the U.S., Europe and other developed nations are embarking on a climate-change experiment: using tariffs on trade to cut carbon emissions. The idea has the potential to rewrite the rules of global commerce. Policy makers on both sides of the Atlantic are looking at targeting steel, chemicals and cement. (WSJ)