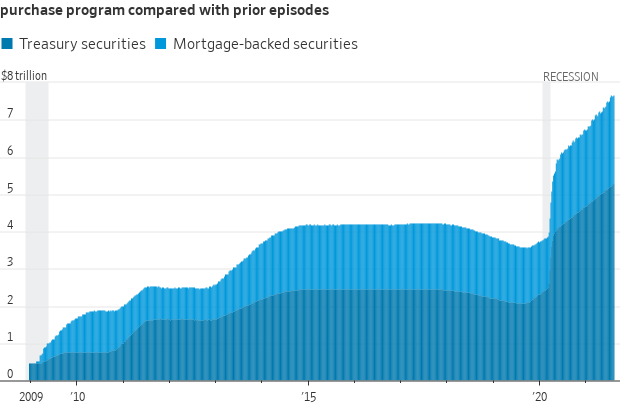 It was a pivotal week for the markets as the Fed minutes last week revealed discussions about downsizing the amount of quantitative easing by tapering bond purchases (Treasuries and mortgage backed securities). Several Fed governors gave interviews this week leading up to a speech by Chair Powell on Friday that confirmed the sentiment was to reduce bond purchases in the coming months. The speech on Friday echoed what the Fed Governors had been saying and we should get more detail on September 22nd at the next committee meeting. There should be a good deal of anxiety in September as the sentiment from the Fed was that they have no choice in the matter and that the tapering is going to happen. The last time the Fed tried this was Q3 of 2018 which put the S&P into a 22% correction that stopped when the high-yield market locked-up which caused the Fed to reverse course. Things are different now and I think the messaging this week solidifies the Fed’s steadfastness in their conviction regarding inflationary pressures. Don’t fight the Fed.

So, how big is the Fed’s balance sheet? The chart below shows the size of their holdings since the financial crisis. For perspective, prior to the financial crisis, anything near $1T was considered getting “too big”. With holdings currently above $7T that should put in perspective how far above normal this has become over the years. Let’s not forget all the debt that has been created by corporations in this time period but that is a discussion for another time. The pandemic has caused a dramatic rise in holdings so that begs the question as to how much tapering is needed to get inflation to cool off? The markets will wrestle with this question in the coming months – I don’t think the Fed knows, either. Will other central banks follow the Fed? If they do, there will be a massive drain in global liquidity but that would only happen if inflation accelerates in the coming months.

How is the stock market holding up? Good but certain technical indicators like the McClellan Summation Index is sending a warning signal as shown in the chart below by Sentiment Trader. The worst possible combination for this indicator is when it is below zero and declining which is what the S&P 500 is showing now despite making new all-time highs this week. A negative divergence that can’t be ignored. I would also like to point out that this tool is not great for timing purposes so this divergence can continue longer than you would expect but it is definitely worth watching.

The chart below is from Friday morning so it does not show the slight new highs made in Friday’s session (system maintenance this weekend). The main thing to take away from this chart is that a break of the 4400 area would warn of a 10%+ correction down to the 4000 area. Upside looks limited from here but a move up to 4550/4600 is not out of the question in the short-term. The next Fed meeting will be significant and how the market begins to digest the tapering news will likely show up in next week’s trading.