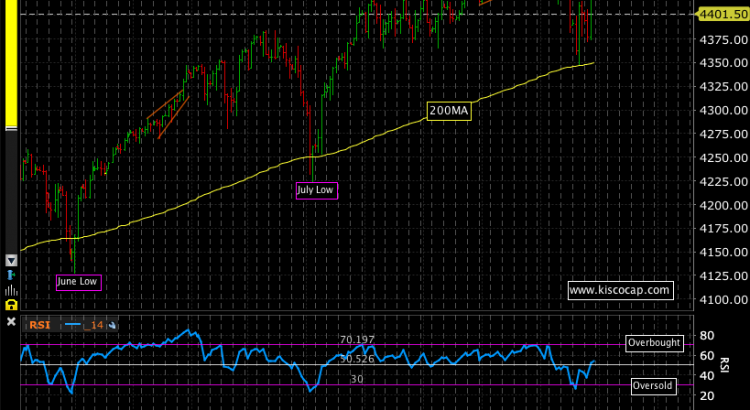 Another sharp drop this week may be warning that we are approaching a top in the coming weeks. The rotation of various sectors is getting tired and thinner which means the market is weakening as it pushes higher. It is possible that a top is in place but the price action on Friday rebounded high enough to open the door to one more new high. I would expect that the 4550 area would be an upside extension with a lot of resistance so we will see what happens in the coming sessions. If we break below last week’s low than it is likely a top of some degree is in place.

The Fed was in the spotlight this week as the minutes from their last meeting was released on Wednesday where several governors expressed the desire to reduce bond purchases within the next six months. The last time the Fed tried this was Q3 of 2018 which caused a three-month corrective period that dropped the stock market 22%. The market will be watching for clues in a speech by Fed Chair Powell at the Jackson Hole Symposium on Friday. He may provide some clarity on the minutes but that is unlikely as the next Fed meeting is September 22nd and why not wait a few more weeks. However, he may float the idea of a new policy metric such as incorporating the rising cases of the delta variant as part of their decision making process. This would give them cover and save face if they decide to keep the QE spigot wide open until sometime in 2022.

The chart below is provided by Elliott Wave International and shows the parallel path the coronavius may be taking with the Spanish Flu from 100 years ago! Will the financial markets follow this pattern? I think most countries have limited ability to shut-down like last year but we are seeing this happen as the world’s 3rd busiest container port, Ningbo-Zhoushan in China is partially shut-down because of the delta variant. Also, New Zealand is essentially shutting down their entire country and Australia is having issues in Sydney due to a few covid cases. Additional lockdowns may be in store on a country by country basis going into the Fall months.