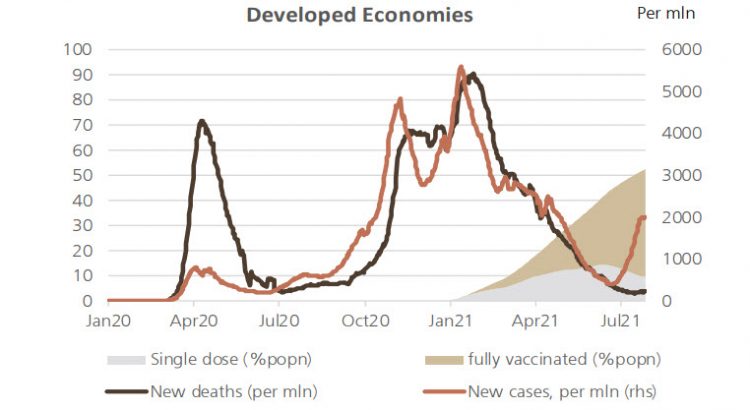 The coronavirus has a more contagious variant that is spreading but fortunately vaccinations are providing protection against severe reactions to the virus. The concern for markets is that the politicians will shut-down the economy but I think that is a long-shot as economies around the world need to get back to business. The inflation we are seeing across the globe is largely a supply issue as corporations are more likely to horde raw goods as a hedge against disruptions from government shut-downs. This also has implications for just-in-time inventory and how much liquidity is tied up in raw goods but that is a discussion for next year. I expect this variant will finally get the message across to the unvaccinated that this virus is here for the duration and a shot in the arm is preferred to a hospital bed and a ventilator.

In the chart below for the month of July, there was a sharp drop mid-month in the S&P 500 only to rebound and close out the month near all-time highs. The last several sessions have shown consolidating price action which normally precedes another move higher. The market looks to be digesting the potential repercussions of the delta variant and so far there seems to be little change. However, the central banks now have another reason to stay on perma-hold regarding their monetary policies and the last time I checked the stock market swims upstream in pools of liquidity.

Lots of talk in the media on the delta variant of the coronavirus and you can see in this chart below that new cases are rising in the month of July. Fortunately, the number of deaths (black line) is not tracking the new cases so that must mean that the vaccinations are providing some measure of protection to the global population – we will see if this relationship holds in the coming weeks. According to this chart, about half of the world’s population has been vaccinated which is good progress and should help in keeping the delta variant from overwhelming hospital systems.