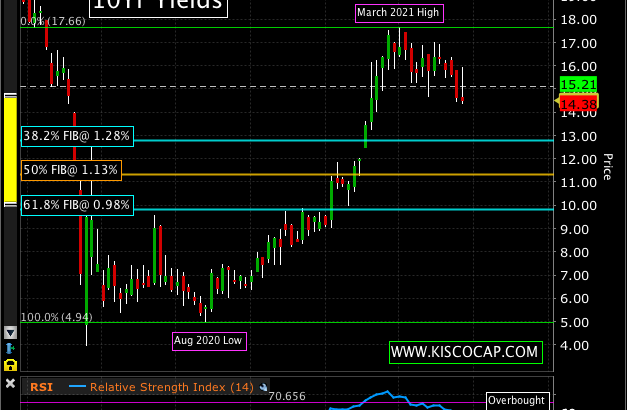 The Federal Reserve met on Wednesday and hinted that interest rate rises may happen sooner than expected. The time frame they projected was a 2023 increase but we all know there is no need to wait that long. You would have expected that bond yields would rise in reaction to this news but as you can see in the chart below, the opposite happened.

Why? If you consider that bonds can get oversold just like stocks then we can follow some of the same technical indicators to better understand what is going on. In the chart above, you can see a dramatic rise in 10Yr treasury yields – particularly in the first quarter of this year. Eventually that creates an unsustainable rise which needs to be corrected. We can see that yields actually topped in March and have been dropping ever since. So, the drop in yields this week is just a continuation of this pullback and the retracement levels in the chart (1.28%/1.13%/0.98%) are potential targets in the coming weeks (days). This drop in yields may seem confusing but this pattern looks typical of an uptrend and should continue higher towards the 2% area later this year. This also means that inflationary pressures will likely continue and that there will be a rate hike by the Fed sooner than expected. The chart of the 10Yr will be one to watch this summer.

You can see below how stocks reacted to the Fed news this week. A pretty sharp drop that has now created an oversold condition. The 4100 area should hold unless a larger degree correction is underway which would be a surprise given the rebound in growth we are seeing in the economy. The real question is how much longer until supply chains normalize so that there is clarity on wether inflation is transitory or enduring.

As the following chart shows, food services experienced a rebound over the past few months. The overall spending exceeded the pre-pandemic level for the first time in May.