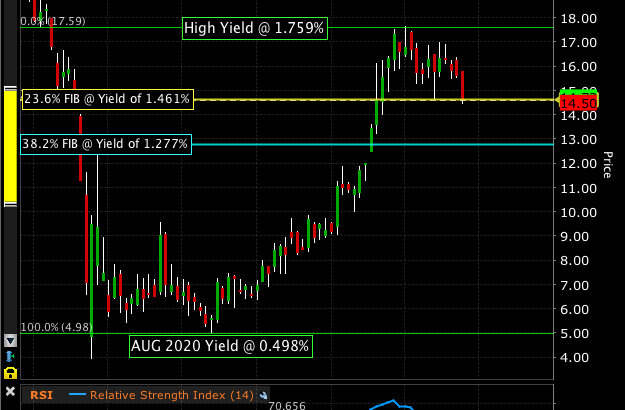 The price action in bonds took an interesting turn this week as yields dropped into a CPI print that showed rising inflation. Expectations were that bond yields would rise on a higher than expected number (which we got) so the drop was a surprise to many. As you can see below, yields rose dramatically starting last August in anticipation of an economic recovery. And then yields accelerated higher in Q1 of this year as inflation expectations rose as the pandemic lockdowns subsided.

Now, we have an uneven recovery with workers slow to return to their jobs and supply chains interrupted. So this part of the recovery will be tricky to read as you could say lower yields are signaling slower growth or maybe that inflation will abate or some combination of the two. But the answer may be in the chart of 10Yr Treasury yields.

If you look at the Relative Strength Index (RSI) at the bottom you can see an overbought condition was created with a reading above 70. All overbought conditions are eventually worked off through corrective price action so this looks like 10Yr yields could fall as low as 1.277% in the coming weeks before resuming a push towards 2%. Without this chart it all seems very confusing considering a recovery from a pandemic is like a 100Yr flood – nobody has that playbook. The recovery should continue and inflation pressures will exist until there is equilibrium in the supply chain (probably next year). To sum it up, yields should drop in the coming weeks and push higher into the end of 2021. How did the stock market react to all of this?

Well, the S&P 500 made a new all-time high after many weeks of trading sideways. You can see in the chart below that not much has happened since April with the only action being a pullback to the 5/13 low at 4039. Since then, the S&P has had a choppy advance to new highs and a wedging pattern (purple lines) is now on the chart which implies a sharp pullback soon. However, some of the technical indicators like the advance/decline line are making new highs while volatility keeps making new lows. Both tell me that an imminent plummet in the S&P 500 is less likely and that equities will edge higher into the heart of summer.

Which one do you use the most?