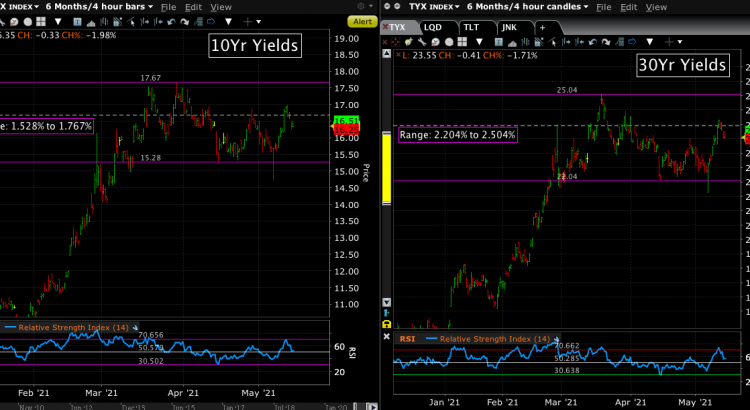 Inflation rising was the theme this week in the markets as CPI & PPI data (see more below) rose sharply indicating inflation is in the pipeline. As the economy emerges from the pandemic not everything is opening at the same pace. This choppy opening means there are shortages and price spikes as demand and supply try to find equilibrium. This week, there was finally evidence in the data which caused a hiccup in the equity market.

However, the S&P 500 was already in short-term overbought area this week as evidenced by the RSI indicator at the bottom of this chart. The pullback also fit very nicely into a 38.2% pullback from the March 5th low which is common in a correction within an uptrend. The rebound on Friday was enough that the odds are good that the inflation scare was just a dip and that the S&P 500 should continue higher next week. If I am wrong and there is another leg lower, than the 50% pullback level at 3976 would complete a three-wave correction.

Interest rates are the best truth tellers when it comes to growth and inflation. In the charts below, I have the 10Yr & 30Yr Treasury yields which look very similar. Both spiked on the inflation data this week but as you can see they stayed within their respective ranges developed over the past several weeks. I would have expected to see bond yields blow through the top of their ranges if the market was pricing in sustained inflation – didn’t happen. I think the inflation readings will be scrutinized for the rest of the year but for now it was another data point validating that demand is returning as we close this chapter of the pandemic.