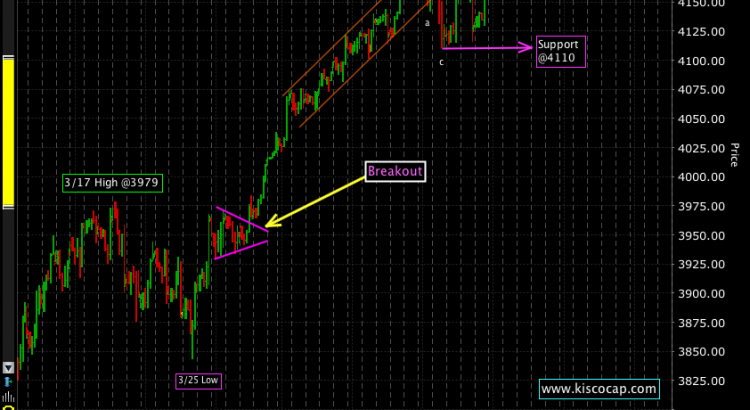 May Day, the ancient festival of Spring is finally here and so are the first months of emerging from the stifling nature of living through a pandemic. The heart of earnings season began this past week and so far companies are profitable but are signaling that higher inflation is in the pipeline and there are still issues in acquiring raw goods for production. There are already signs of inflation as housing prices reach new highs, gasoline is at two year highs, food prices are at 10 year highs and commodity prices keep pushing up. The Federal Reserve made little mention of policy change in their meeting this week but that may change by the end of the year if cost pressures are persistent (my opinion).

If you are wondering why the growth companies have been trading sideways for three months than look no further than the chart of the IWM which is the Russell 2000 ETF. This ETF holds companies that should have above average growth prospects and the sideways action is frustrating, but it signals consolidation before the next move higher. The price action did wedge (yellow lines) and it looks like the early stages of a breakout are underway. A move above the previous high at $235 would signal growth companies will have a good May.

The S&P 500 has had a nice move higher since March and has been consolidating the last two weeks. The end of month was weak but there was an overbought condition to work off so a bit lower may be next, but 4100 area should hold as strong support.

Overall, the market is still pointed higher and these two indices could line-up in the first half of May. I think we continue to get the same story in the coming weeks from earnings – things are improving and prices are going up.

8 million tonnes of plastic ends up on the world’s oceans every year but how does it get there? There are multiple ways plastic comes into direct contact with the sea including the wind, drains and illegal dumping. Rivers are the primary conduit as 90% of all plastic waste entering the world’s oceans from only ten rivers.