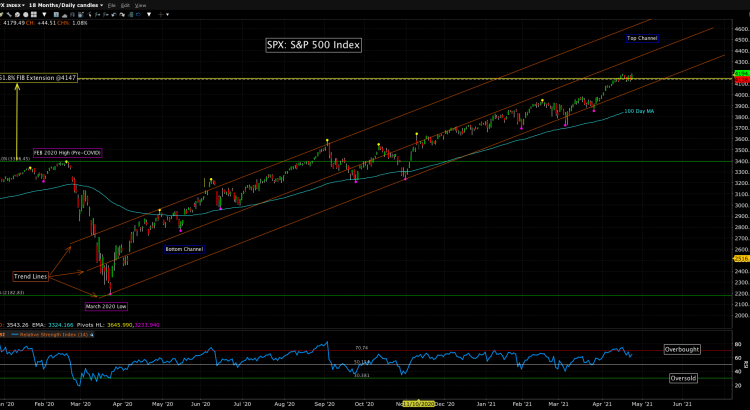 Trending right along this week into earnings reports. So far so good and the only hiccup was that the Biden administrated proposed a doubling of capital gains taxes which caused the S&P to plummet mid-day on Thursday. However, you can barely see it on the chart below as the market is trending higher out of a deep recession. Inflation risk is also rising as supply chains are tight causing upward pressure on prices. We will hear from CEOs soon enough about recovery prospects and inflationary pressures that may impact their margins. The next few weeks will unleash a flood of earnings so stay tuned.

The S&P 500 Index has formed a trend channel from the March 2020 low that is divided into top and bottom trend channels. The peak to trough from 2020 has an “echo” or a fibonacci extension at 4147 at the top of the chart which is a significant resistance barrier that was overcome on April 15th. The S&P is consolidating above this level which is a good sign that higher prices are likely. This level also now becomes a key support level that we can look to hold to gauge the health of the overall uptrend in the coming months.

It really is all about chart patterns and earnings reports over the next few weeks so here are a few notables for next week:

According to CB Insights, there were more than 650 unicorn startups (companies valued at $1 billion or more) valued at a combined $2.2 trillion in the world as of April 2021. It is only a matter of time before their IPOs.