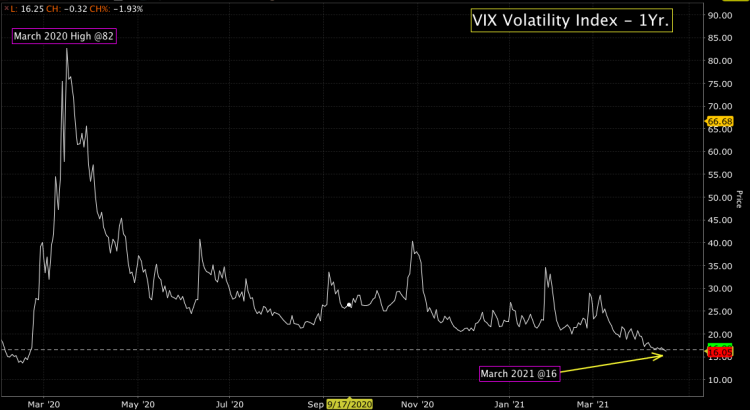 Earnings are up next for the first quarter which should show signs of the economy re-opening and companies ramping back up to pre-pandemic levels. The bank earnings kicked off this week and we should get near 100 earnings reports next week across various industries. I would expect many companies will beat Q1 of 2020 as the pandemic began to close down the economy in March. The outlook by CEOs for the remainder of 2021 and information on supply chain issues will be of particular interest to investors in gauging how quickly the economy will return to full capacity. However, the recovery remains uneven as certain sectors like semiconductors are in full swing while retail and hospitality need more time to heal from the pandemic.

The chart of the S&P 500 below has been grinding higher in April which is typical within bullish trends. The lack of observable subdivisions or dips in price means that it could continue well into earnings season. The FIB extension at the top of the chart were exceeded this week so the S&P is showing a trending pattern with low volatility. An overbought condition existing on the technical indicators in the bottom of the chart but that is normal in an uptrend.

The media has been full of news items recently that are calling for a correction but those don’t happen without a rise in volatility. And you can see in the chart below that volatility continues to move lower which means large price drops in the near-term are unlikely. Earnings results may bring some volatility back but the path of the economy towards a full recovery looks to be taking place.

After wholesale prices of food initially slumped during the coronavirus pandemic, the FAO Food Price Index has shown a steep increase since last Fall. Food around the world is 18.5% higher than the 2014-2016 baseline average of 100. The March figure is the highest of any month in more than six years.