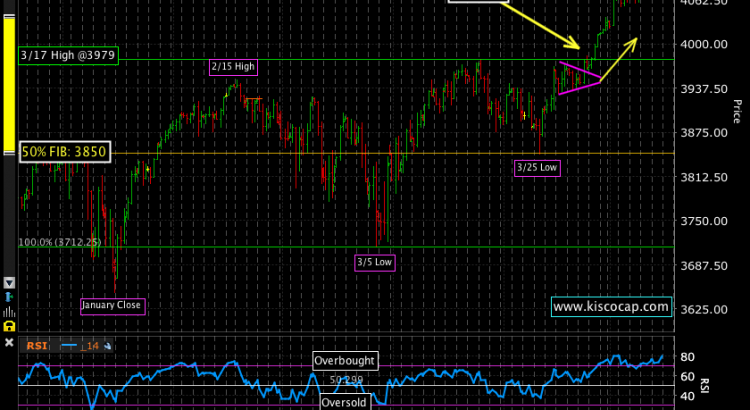 A mixed breakout has been underway this past week. Although the S&P 500 and DOW are making new highs the Russell 2000 and NASDAQ have lagged. When all four synch-up then there is the potential for an impulsive advance. A pullback may be how they re-align but volatility is making new lows which means large one-day moves are much less probable.

The chart of the VIX Index has been falling since the March 4th high (stocks bottomed one day later). This indicator is now at one-year lows which reflect a market that is trending higher and with little intra-day price movement. Some might say this indicates complacency but the chart patterns are leaning towards a trending market.

The chart of the S&P 500 below, shows a continuation rally from the 3/25 low. I have a fibonacci extension that shows a resistance level at 4143 which is not far away. A decent shot at testing this level early next week.

Earnings begin in earnest next week with the banks. Will the outlook from corporate America bring on volatility due to supply chain issues? Or will the recent breakouts be validated if earnings guidance is better than expected? It will probably be a sector by sector affair as the recovery is uneven right now but that will likely change in the coming months.