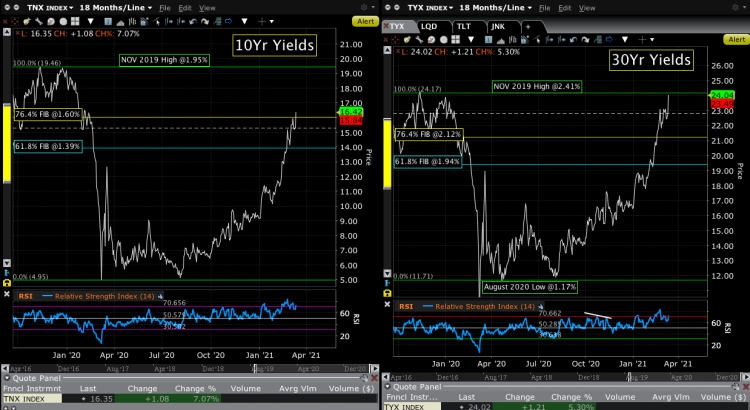 The Bull Market rolled on this week as the pullback to the March 4th low at 3720 was put in the rearview mirror. The S&P didn’t close at a new high this week but the momentum in the stock market looks to continue into next week or longer.

The bond market was in the spotlight this week as three bond auctions took place this week that were closely watched by fund managers. The auctions for 10s/30s had the most anxiety around them and the results were “ok” so there was no clear signal with the results. The trading on Friday resulted in yields closing at the highs and pushing on points of technical resistance as you can see in the charts below. Rising interest rates in an economic recovery is normal but if it happens too quickly then equity markets can get nervous.

How far can yields rise? I expect that 10Yrs will trade above 2% at some point this year (1.635% Friday close). However, the U.S. yield curve is very attractive right now for Japanese and Eurozone fund managers as their yield curves are trading at negative returns. Even after the cost of currency hedging, the 1.63% yield on a U.S. 10Yr bond can net them over 1% which is the most in several years. The chart from the WSJ below shows how much more attractive U.S. Treasuries are right now for overseas investors.

Part of this relationship is due to the steepness of the yield curve. As overseas investors buy U.S. Treasury bonds they hedge with currency swaps which are tied to the cost of a 3-month T-Bill which yields a measly 0.03%. So, hedging costs for non-dollar investors are minimal when the curve continues to steepen.

At some point, these investors will come in and put a stop to the rise in U.S. yields with buy programs but that is not happening yet. The good news is that the stock market traded well on Friday despite the higher yields which is a good sign for continued higher prices in the equity market.