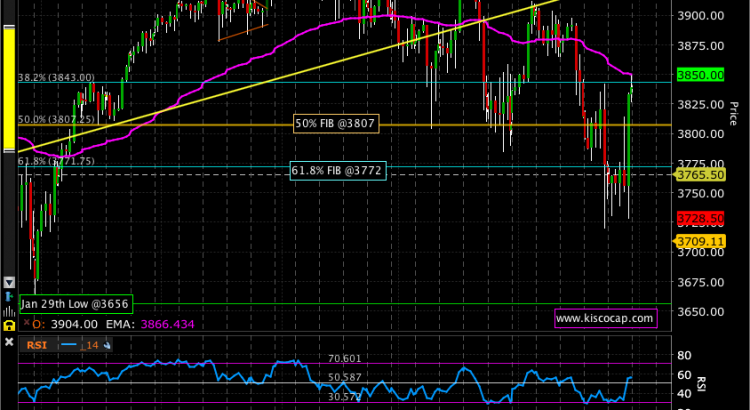 The stonk market put in a short-term top in mid February and has been pulling back for the last three weeks. The rationale has been that inflation and higher interest rates will kill the rally in stocks. However, stocks also like growth and consensus is that a burst of GDP is on the horizon.

I would like to point out that interest rates typically rise with stocks and that most technical analysts look for this relationship as an economy expands. If we look at the chart below, the S&P 500 was poised to give back all the gains from the first half of February. The breach of the 61.8% FIB, which typically signals a 100% retracement, was a fake-out and pulled in many sellers as evidenced by the unusually large volume on Thursday/Friday. The last two green bars show the magnitude of the reversal – sellers below 3772 ended up chasing the market higher Friday afternoon. A rough end to the week for bears.

Most market pundits blamed Fed Chair Powell and his online interview with the Wall Street Journal this week for the volatility in stocks. The yield curve jumped 10bps during this interview as he “disappointed” with his commentary. But if you look at the chart of the 10Yr Treasury bond below, interest rates have been rising steadily since last July. So, this interview is coincidental with this last push higher in rates. There is also a high level of short-interest (traders betting on lower bond prices) that developed these past two weeks so I think lower yields are on tap as these trades get unwound and oversold conditions get worked off. If this all happens next week, stocks should be on good footing to confirm a bottom on Friday.

In 2020, the United States imported $11.1 trillion worth of goods and services while exporting $8.5 trillion. Below is a breakdown of the various categories by industry.