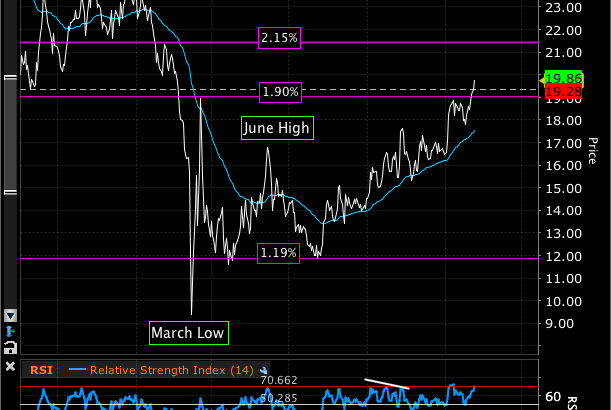 Another coronavirus bill passed the Senate early Friday morning which includes more aid for consumers and small businesses to get through the next few months. Where is all this cash going? In the chart below, you can see that the US personal savings rate has jumped sharply as consumers stay at home and build cash as states run their economies in slow gear. As the U.S. economy re-opens and the snow melts, there should be a sharp increase in the economy (hopefully) in the first half of this year.

The S&P seems to be taking the unusually high savings rate into consideration as these monies will be deployed into the economy like a bat out of hell. Everyone I know can’t wait to spend money and return to their pre-corona life. The technicals look to be reflecting this pent-up demand as the trend channel below held nicely until the breakdown in the last week of January.

A recovering economy means the long-end of the yield curve will rise in anticipation of increased economic growth, rising inflation expectations or both. We are seeing this now as evidenced by the 30Yr bond breaking resistance this week at 1.9% – this means 2.15% is likely the next stop. That would put the spread between 2Yr & 30Yr interest rates just over 200bps which is normal in expansionary periods.

The yield curve will be much more in the news in the coming year as the Fed has turned up its nose at the risk of inflation (lower for longer) and now we have Congress dumping trillions into the economy. Inflation may come sooner than expected as consumers unleash all those dollars sitting in their savings accounts just waiting for that sunny day after this pandemic has passed.

The Reddit-fueled frenzy in stocks such as GameStop and AMC Entertainment is prompting calls for regulators to reconsider something called payment for order flow. This type of relationship makes it possible for the U.S. brokerage industry to advertise zero-commission trades. No longer needing to pay a commission on trades and empowered by easy-to-use trading apps like Robinhood, individual investors poured into stocks and options at record levels last year.

“If you’re not paying, you’re the product.” It’s been the rallying cry against social media and now it is being applied to commission-free trading. According to data compiled by The Block, Robinhood took in nearly $700 million in payments from high-frequency trading firms that pay for “order flow” or execute trades for the online brokerages which means users may not always receive the best prices. This is a controversial and crucial part of the business model of trading apps, and as more retail investors learn about it, the pressure to change increases.

The simmering debate over payment for order flow boiled over last week after some brokerages restricted trading in GameStop, sparking heated speculation that the curbs were imposed at the behest of giant trading firms that handle those brokers’ order flow.

“Payment for order flow, at the end of the day, is legalized bribery that appears to incentivize brokers to violate rules,” said Dennis Kelleher, president of Better Markets, an advocacy group that lobbies for tighter financial regulations. (WSJ/FT/Investopedia)