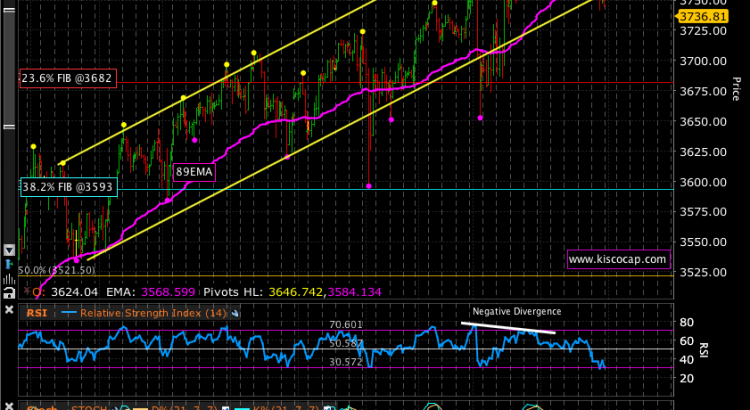 Cabin fever grows as we anticipate a return to normalcy but recent efforts to distribute a vaccine show we are in for a long winter. The stock markets have performed well recently as we slog through the next wave of the coronavirus so let’s start by taking a look at how we are trading in the stock market.

The chart below is of the S&P 500 futures since Thanksgiving and you can see there is a nice trend channel that has developed. However, at the bottom of the chart, a negative divergence in the Relative Strength Index (RSI) occured on the January 8th high. This means that weak hands pushed the index to that last high and now the price action on Friday indicates something larger to the downside may be in play.

So far, not a big pullback but we did close below the trend channel and sentiment readings have been quite high these last few weeks – high optimism can be a sign of a reversal. In all likelihood, the S&P 500 will continue lower next week and a move down to the 38.2% Fibonacci retracement at 3593 would not be a shocker – a 6% pullback from the previous high.

Bond prices have also been falling as yields rise which indicates either a recovering economy or higher inflation (or both). However, if the rate of change is too fast then stocks will take this as bad news and trade poorly. The chart below shows that 30-year Treasury yields have risen steadily since the August low of 1.18%. Resistance was met this week at 1.9% but if momentum pushes yields through 2% then higher than expected inflation may be creeping into the system. In this case, the Fed would need to raise interest rates sooner than expected which they have promised not to do for the “foreseeable future”. But then again, they are making this up as they go along.

One final thing, earnings season will ramp up next week so we will see which parts of the economy are strong and those that will languish for longer.

According to Bloomberg, there were 244 large companies with liabilities above $50 million that applied for reorganization or a complete liquidation form of bankruptcy. Many of the large ones happened earlier in the pandemic, with energy companies like Chesapeake Energy, California Resources and Ultra Petroleum all filing for bankruptcy with a combined $24 billion in debt. Another industry, consumer retail, saw longstanding companies fall from COVID-19 closures; among the most recognizable being Neiman Marcus and J.C. Penney. (Statista)