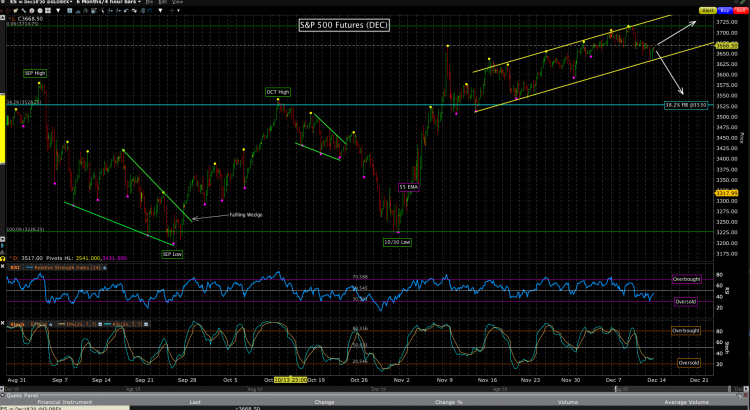 Cabin fever may come early this year as the coronavirus keeps many of us inside which means most of you can’t wait for spring. The Spring of 2021 will be known as the inoculation period (hopefully) from the coronavirus and a pivot to resuming a normal life. The price action in the stock market tells us that next year should be pretty interesting.

If we focus on the last three months of trading for the S&P 500 in the chart below, we have see-sawed since September which is now giving way to a breakout off of the October low. The parallel yellow lines show a start to a potential trending market. However, we are testing the lower trend line and a break next week would likely bring us down to the 3530 area (a 5% pullback from the most recent all-time high).

Small caps are outperforming after several years of lagging as shown in the chart below of the Russell 2000 (futures contract). As you can see there is a breakout underway from the previous all-time high last made in August of 2018. This price action in this index is giving a clue that a recovery next year could be widespread which is good for market breadth.

There is also life in sectors like energy and steel which has been dead money for years so that is encouraging. For many years we have seen a handful of large cap technology stocks (Apple, Google, Facebook, Amazon, etc..) push the major indices higher so a handoff to a wider breadth of stocks and underperforming sectors could be the pathway to higher prices next year.

As the following chart shows, the COVID-19 crisis accelerated the shift to online retail as millions of Americans have resorted to shopping online. This trend will likely accelerate through the holiday season.