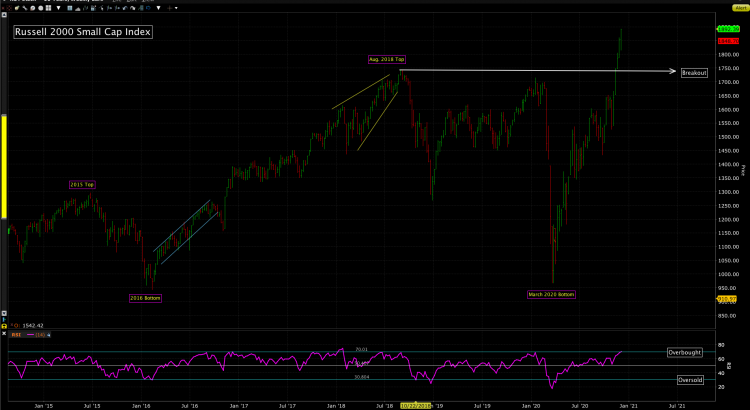 The indices are breaking out to new highs despite the ongoing rise in new cases of the coronavirus. Stock markets are forward looking instruments which means they are messaging that 2021 will be a year of recovery for the global economies.

More stocks are participating in this rally (good breadth) as sectors that have been in multi-year downtrends like energy and steel are showing a turnaround. These sectors are under-owned and could take the baton as market leaders as there is likely a good deal of pent-up demand for commerce in the coming year.

For now, volatility continues to fall and the trend remains to the upside. Two charts this week. The first is the S&P 500 which may be trying to carve out a new uptrend channel.

The second chart is of the Russell 2000 which is comprised of small cap stocks that grow the most when the economy is healthy. The difference in this chart from the S&P is that the Russell 2000 has not made a new high in over two years and has lagged the other indices. The low in March of this year for this index is clearly the end of a two year correction and there is a clear break-out to new highs. A solid breakout that the other indices will follow in time.

Not a great chart for commercial real estate.