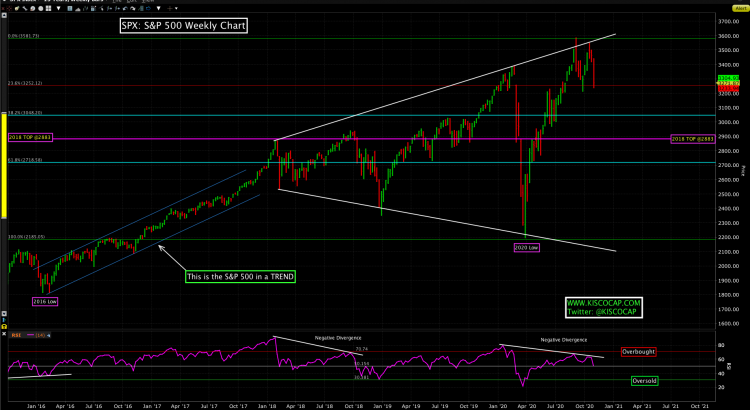 It is decision time for the S&P 500 and it is no surprise that the Presidential election coincides with a potential top given the policy divergence between the two candidates. If we ignore the politics and focus on the chart below, it looks as though the next move is going to be lower in the S&P 500. The rebound from the March low ended in early September as the last rebound high on October 12th failed to take out the previous high.

I am using the same weekly chart below that I used in Swells of Uncertainty from last week (each bar in the chart is equal to one week of trading). Here, I assumed the September high was a top and laid over a Fibonacci grid to determine the most likely points of support. One observation is that the 50% retracement at 2883 lays exactly at the January 2018 top which may act as a magnet if we begin to accelerate to the downside in November. The good thing is that this is a significant point in the chart and should act as support. Also, the Relative Strength Index on the bottom is showing weak momentum into the September high which creates a negative divergence and warns of corrective price action.

The very nature of corrections manifests in layers of uncertainty and are difficult to navigate. However, if I can boil everything down to one thing is that if the March low (2185) holds in the coming months then a new bull market will be in the making. One with a recovery from the pandemic that would mean new highs and a trend like we last saw from the 2016 low. If we break below the March low, then a credit cycle is underway where we will see rising defaults and a contraction in the economy. I think we find a bottom in the coming months but it does come down to what it means to hold/break 2185 on the S&P 500 index.

For perspective, the chart below shows what is considered to be a good long-term view on valuation of the stock market. You don’t have to be a Wall Street person to see that a mean reversion is overdue.