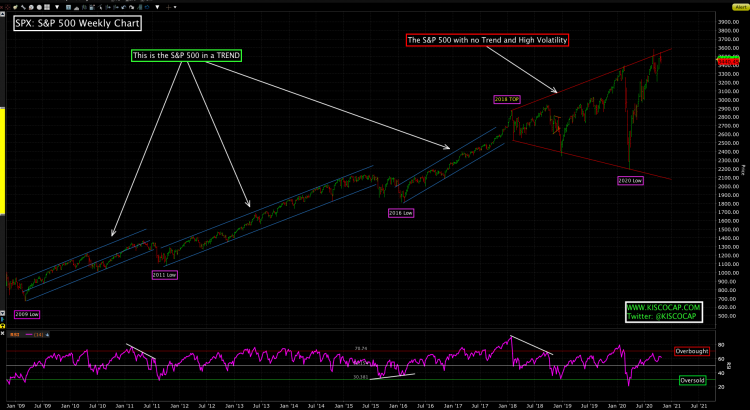 The waves of uncertainty are washing ashore as the path to 2021 is unclear. On one hand we are experiencing an economic recovery but on the other is a second wave of coronavirus cases (overseas and domestic) that may reverse the economic recovery over the past few months. There are drug companies manufacturing a vaccine but there is a question of their efficacy as most vaccines take years to develop. Not to mention the thick and tedious political environment which is unlikely to end on November 3rd.

The stock market absorbs all this information and spits it out as a price for all to see. Most technical analysts are focusing on the very short-term as the long term outlook is too difficult to confidently predict for a market that has not trended since the January 2018 top.

In the chart below, I tried to illustrate since the 2009 low where the S&P 500 has trended. As you can see, markets that trend are contained by parallel lines with an upward trajectory that is predictable and characterized with low volatility. The 2018 top was significant as it marked the beginning of a period of high volatility and uncertainty. The differential between these two states in the S&P is dramatic and easy to observe. Obviously, the market is telling us that we as a group are uncertain about our future. One thing I know for sure is that it will not last forever and that a trend will once again emerge in this chart.

Tune in next week for the pre-election analysis on the stock market technicals!

Does Google have a monopoly? Congress will be scrutinizing their business practices in what could be a tidal change in how silicon valley conducts business.