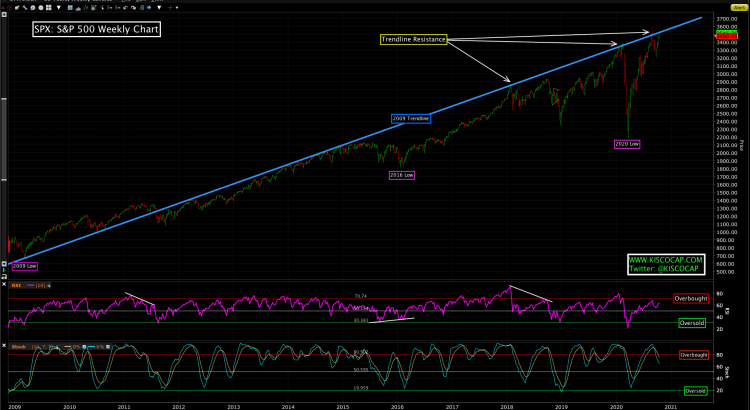 A bit of a yawner this week as the markets traded sideways while waiting for another stimulus package from Congress. Perhaps we get it before the election but the politics seem to be too messy right now to expect anything in October. We are in the twilight zone of pre-election uncertainty as the tax and regulatory policies are up for grabs while markets wrestle with the timing of a vaccine and getting back to 100%. None of these difficulties will last forever so 2021 must be better, right?

For now, the trend of the stock market is still higher but there is some serious trend line resistance in the chart below. The blue trend-line from the 2009 low has been respected many times by the S&P and now we are knocking on its door one more time. A breakout above the trend-line in the 3600 area would be a significant development and signal that a strong uptrend may be underway. Of course, this implies a much better 2021 and a return to normalcy. And a big rollover to the downside means that Congress will be passing that stimulus package.

Earnings season did get started this week with the banks which posted decent numbers. The market will be looking for a recovery in business in Q3 and feedback from CEOs on their outlook for the remainder of the year. This information could be key for how we trade before the election.