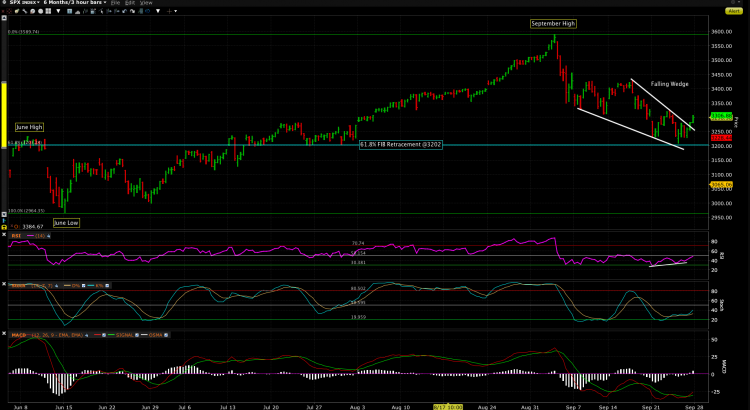 There are waves of uncertainty circulating the news cycle every day. Presidential election, economy, recession, recovery, Fed policy, housing, riots, coronavirus, vaccinations and it gives everyone a headache. It is tough to get clarity on these matters these days and the stock has certainly reflected this sentiment these past three weeks. Many are calling for a crash in the coming months which tells me something else will happen as markets rarely follow consensus.

The S&P 500 has been twisting its way lower all month which has left the technicals with a clouded picture. A large correction on the horizon or just another pullback in a larger uptrend? There may have been some clarity in the closing hours of trading this week. However, we will need some positive follow-thru on Monday.

Let’s examine the chart below for some signals.

Bulls appeared to have the upper hand on Friday so let’s see if they carry the positive momentum into next week. Another consideration is that a new stimulus package may be negotiated in the coming days which would be a lift to consumers that are still without a paycheck – positive development, for sure. Also, the first Presidential debate is on Tuesday and Wednesday is the end of Q3 where fund managers re-balance their books (usually bullish).