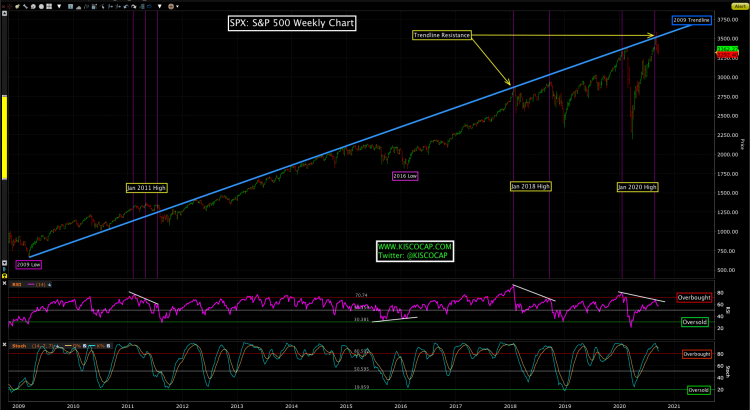 Is it time for a correction? Stocks have closed lower over the last three weeks and we did break a short-term support level on Friday afternoon which opens up the door to lower prices. We are also in a seasonally weak part of the calendar and there is a lot of uncertainty over the election and the ability of the results to be properly certified given that many may not vote in person.

If we look at the chart below of the S&P 500 Index, the most recent high at the end of August pierced the 2009 trend line (blue) where investors rejected that price level. The result is that most of September has been very choppy and corrective including the close into Friday. Another notable in the weekly chart below is the negative RSI divergence that has developed over the last week. If you look at the bottom of the chart you will see these negative divergences as downward sloping white lines that precede corrections in the S&P 500 (follow the vertical magenta lines higher to see how prices acted). The move from the March low has been unprecedented so it wouldn’t be a shocker to see another 10% move lower from here.

It does seem like the answer to this question will be answered imminently so how we trade next week could set the tone for the remainder of 2020.

People are spending more time outdoors thanks to COVID-19 indoor restrictions. New data shows what people are spending their money on for outdoor activities. In data collected by the NPD group, cycling-related sales are seeing one of the largest upticks in the U.S., rising by 63% compared to this time last year to reach nearly $700 million in sales in June. Paddle sports sales are also up 56% year-over-year for a total of $172 million in June. Golf and camping equipment also made the top list, while sales related to nature sightings and bird-watching grew by 22% year-over-year. (Statista)