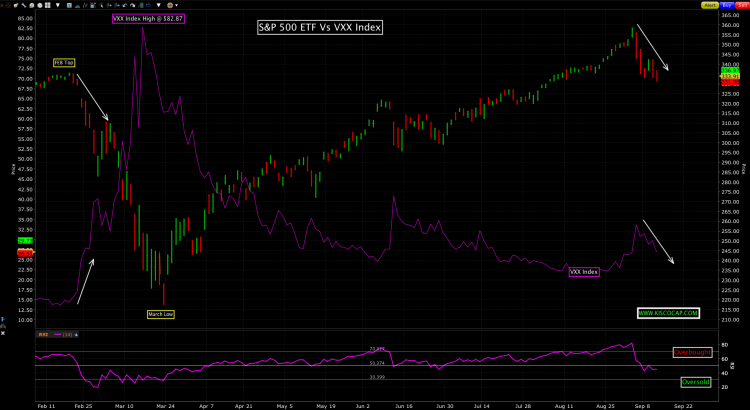 All of the major indices had a rough week as the NASDAQ led the way lower with a loss of 4.1% – the worst week since March. However, the momentum to the downside abated into Friday’s close and volatility did not spike this week like we saw in the steep sell-off in March. In the chart below, I plotted the volatility index (VXX – purple line) verses the S&P 500 ETD (SPY) to show how volatility behaves when stocks decline. The decline in March caused the VXX to rocket higher which was a good predictor of the decline – the two move inversely from each other. However, this week the VXX and the S&P moved in the same direction which tells me a market crash is not on tap.

We also have the Fed meeting on Wednesday so perhaps the market will hit the brakes early next week as stimulus measures are not going away until we see a COVID-19 vaccine. If I am right, there is a good shot we make new highs before considering the potential stock market volatility around the uncertainty of the Presidential election.