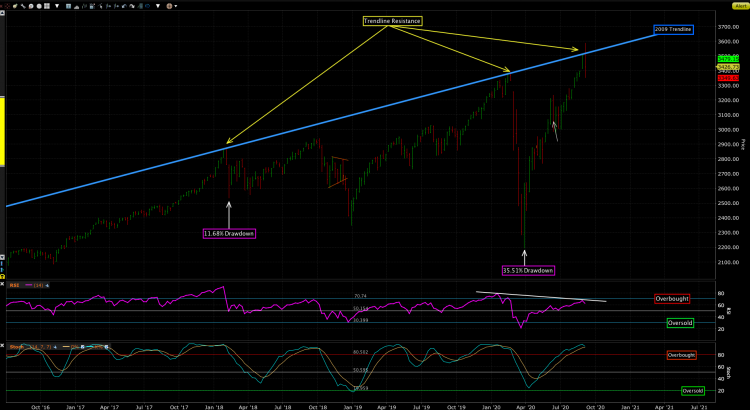 The meteoric rise of the stock market since June hit a wall this week as technical resistance was too much for a continued advance. As I have shown you the chart below over the past few weeks, there is trend-line resistance from the 2009 low around the 3500 area in the S&P Index that was firmly rejected this week.

If we zoom in, we can see that this same trend line has been struck twice before in recent history – the January 2018 top and the February 2020 high.

Let’s not forget interest rates. The market got a double whammy this week as both bonds and stocks fell in price so there was nowhere to hide in this regard. The chart below shows 30Yr Treasury yields and the S&P 500 Index which have diverged for some time now. The two began to converge this week so perhaps the Fed’s ability to keep control of the long-end of the curve will be questioned if rates continue to march higher.

In either case, volatility in risk assets is rising as valuations and technicals are stretched. Some of the Fed governors this week hinted that there is a limit to their programs without providing any details on where they would stop. My read is that the Fed is getting concerned they are pumping up the stock market too much and that we may get some “guidance” or clarity at their next meeting on September 15th.

According to the analysis, which only includes public companies and private companies with public debt and/or assets/liabilities over $2 million or $10 million, respectively, 424 companies announced their bankruptcy through August 9 this year, up 22% from the same period last year and the highest level since 2010.