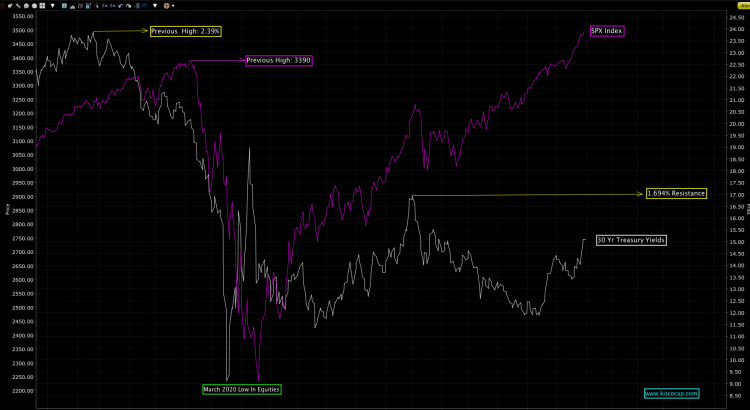 The Chairman of the Federal Reserve announced a change to how policy is conducted with regards to inflation which the market interpreted as lower for longer. Under this methodology, the interest rate increases which began in 2015 would have never happened. With rising inflation expectations due to monetary expansion (quantitative easing) and exploding deficits, the Fed is signaling they will maintain low rates and an accommodative policy despite how much our currency loses its purchasing power. Now, this is a plan and we all know the Mike Tyson corollary that everyone has a plan until they get punched in the face.

Where will the first punch come from? My guess would be the long end of the yield curve. Although record high gold prices could be considered the first jab as its rate of change to higher prices has been dramatic. Keep in mind that the rate of change is what takes investors by surprise. For example, it is much more palatable if the 30Yr Treasury bond yield gets back to 2.39% over the next two years than if that move happened in the next two months.

This is relevant to the chart below as we can see that Treasury yields are “catching-up” to the sharp rise in the S&P 500. How quickly the two converge will be something to watch in the coming weeks if the major indices continue to melt-up. A break above resistance at 1.694% in the coming week(s) would indicate a sharp convergence is underway and a caution flag for equities.

Let’s also take a look at the updated chart of the S&P 500 with the trend-line from 2009. As you can see, the trend line was tapped this week as the index closed at 3,509 on Friday. If this trend-line relationship holds, I expect one of three outcomes: 1) The S&P reverses and begins a pullback to work-off an overbought condition; 2) The trajectory of the index changes and begins to hug the trend-line like in 2013; 3) Stocks break-out and continue their sharp ascent higher into what will be a major top. This may all take months to play out and could center around the results of the Presidential election in November. Until then, the trend in equities remains to the upside.

Several analysts have predicted above average hurricane activity this year caused by a weak “El Niño” current of warm air and water originating in the Pacific near South America. Some analyst have predicted eight or nine hurricanes to occur, up from just six in 2019.