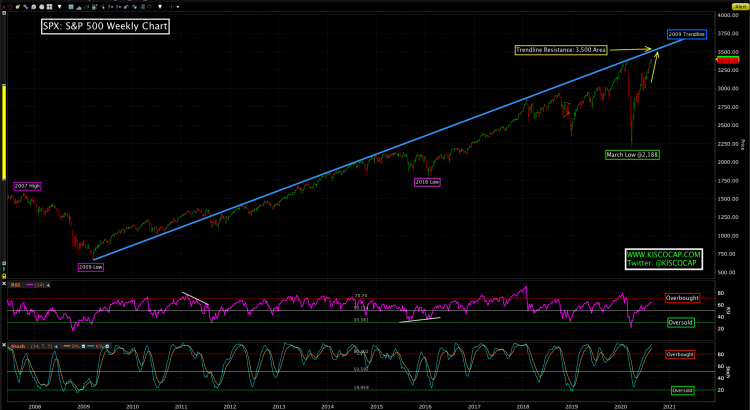 Summer trading is rounding third base and so might this rally from the March low. The size of the rebound does not match the recovery in the economy as stocks have front-run a return to normalcy. As we approach the seasonally weakest part of the calendar, the market will need to wrestle with the uncertainty of a Presidential election and the timing of a vaccine. The massive amounts of monetary and fiscal measures are in the trillions worldwide and they have worked to push up the financial markets into an unprecedented recovery wave.

There are some bright spots in today’s economy as the mass exodus from cities will benefit the housing sector but the hospitality and restaurant sectors will be impaired for some time. This means elevated unemployment could be with us well into 2021 which will drag on consumer spending which drives growth in the U.S. economy. I also think we are seeing the early stages of a permanent shift to remote working and education which will have lasting changes on real estate and how education is administered (no more snow days).

If we review the chart below, we can see a trend line from the 2009 low that has acted mostly as upper-boundary resistance for several years. If we continue higher, we should intersect this trend line around 3500 (about 3-4% higher than Friday’s close). Of course, the market could push through this trend-line in what could be a market melt-up but I think we will have to wait and see on that scenario.

If we juxtapose the recent price action of 30Yr interest rates verses the S&P Index over the past several months, we can see that interest rates are pointing lower creating a negative divergence. If this divergence continues for much longer, I think the S&P will be vulnerable to moving into corrective territory. Timing is the tough part as the S&P has not broken trend and looks to continue a bit higher as we close out the summer. In the meantime, enjoy the remainder of the summer months as things should get interesting in the coming months.