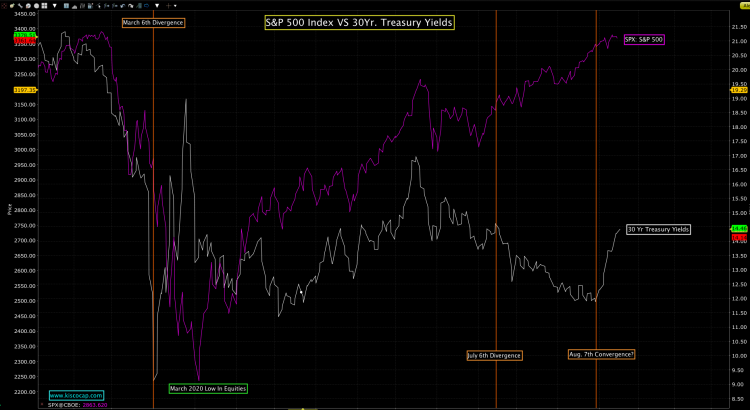 The stock market continues to grind higher as we approach the Fall months and the Presidential election. The push higher over the last several weeks is signaling a sharp rebound in the economy which may be wishful thinking. Several companies claim to be close to a vaccine for COVID-19 but my understanding is that confirming a vaccine works can take years. Until we get one or two more quarters of data on the recovery, there will be some guesswork as to modeling the value proposition in equities.

The chart below shows the Price/Earnings ratio based on expected earnings which shows equities approaching valuations not seen since the tech bubble. If the economy does sharply recover then this ratio will come down but that also means stocks are priced for perfection.

In the shorter term, the chart below will be something to watch. As the relationship between the interest rates and the S&P have diverged significantly over the last several weeks. However, 30Yr interest rates rose this week in a sign that this relationship will align but this could play out in more than one way. Interest rates could continue to rise and align with a rising stock market. Or, the two could meet in the middle with stocks falling as interest rates push higher. In either case, the relationship will converge again which means that one or both instruments is about to make a big move.