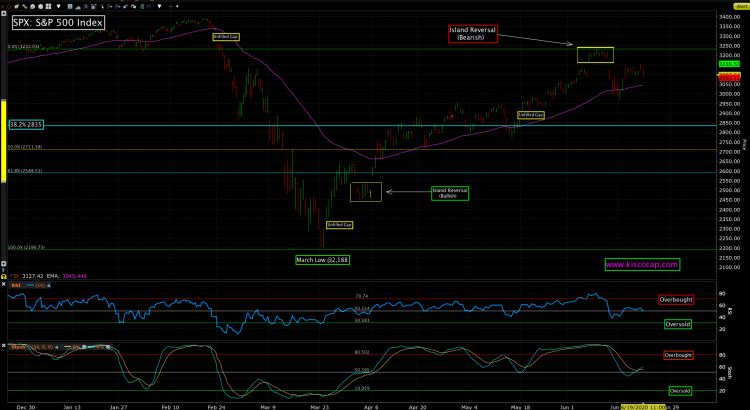 Last week we had a break in trend that was significant as it marked what is likely the end of the retracement (or bounce) from the March low. The island top in the chart below is rare in the longer time frames and the exhaustion gap we saw in Friday’s trading session is a sign that weaker prices are likely next week. The first downside project is the 38.2% (2,835) which is 8.5% lower from Friday’s closing price.

Will it stop there or go much lower because of the economy on pause? Well, there are storm clouds on the horizon in the form of earnings reports which are just 2-3 weeks away. The Q1 reports showed some impact of COVID-19 (two weeks in March) but now we will see just how deep the solvency rabbit hole goes as many companies will report a massive drop in revenues for Q2.

Solvency risk will be the talk in the credit markets so bond spreads will move wider (higher yields) despite the Fed’s stimulus programs. So far, there has been ample liquidity but the bad news is that it all comes from one entity – the Fed. Banks used to be liquidity providers to the bond market but not after the Volcker rule that was part of the Dodd-Frank Act in 2010. Where will the second wave of liquidity come from? Something to think about when bonds are downgraded and rating sensitive investors are required to sell as per their regulatory mandates.

Jerome Powell warned Congress this week that they should continue with additional stimulus packages as this problem is not going away anytime soon as many consumers will be out of work for an extended period of time. Reading between the lines you could say that he is nervous about these earnings reports and maybe the stock market got the hint.