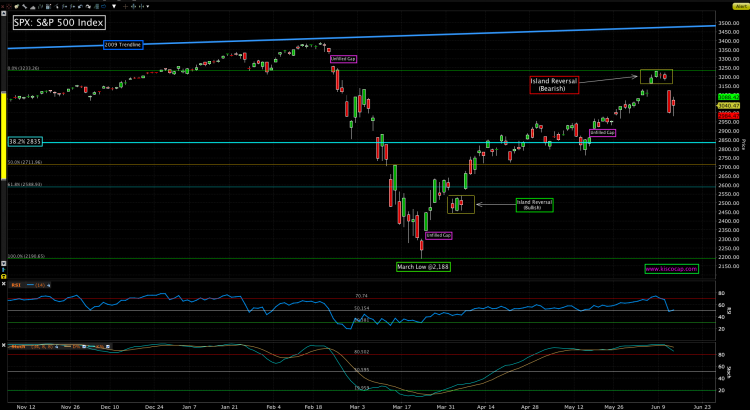 Many things went from hero to zero this week as the Fed threw cold water on the prospects for a 2020 recovery and the market rolled over in a fashion that warns of significant downside. Last week, we had good news with a much better than expected jobs report and now the cold reality of COVID-19 relapses, social unrest and a pessimistic message from the Fed have pulled the rug out from the stock market.

As the chart below shows, we have broken an uptrend from the March low with the stock market being down as much as 7% on Thursday. This type of price action is similar to February when the S&P began to plummet. Perhaps, a bit too early to sound that alarm bell but we did have a 4-day island top and there is still some room to go before we hit the first retracement level at 2834 which is another 7% lower than the close on Friday. If there is an acceleration through 2600 then the March low may very well be re-tested.

The close on Friday is far from any major support level so it is likely this sell-off continues into next week. A failure of the market to recognize the path of how this all plays out may well be the reason why investors de-risk – a self-fulfilling condition. Overall, the Fed’s interventions are creating too large of a distortion field around prices for investors to remain confident of how to confidently allocate capital. This quote below from Peter Fisher (ex US Treasury and Federal Reserve official) sums it up well in my opinion:

“Because of the Fed’s interventions, market prices and credit spreads don’t have the information content that we think they have. The Fed is mucking up what prices mean.”

As the following chart shows, the ratio of market capitalizations (as measured here by the very broad Wilshire 5000 index) to GDP is even higher now than it was shortly before the dot-com bubble burst.