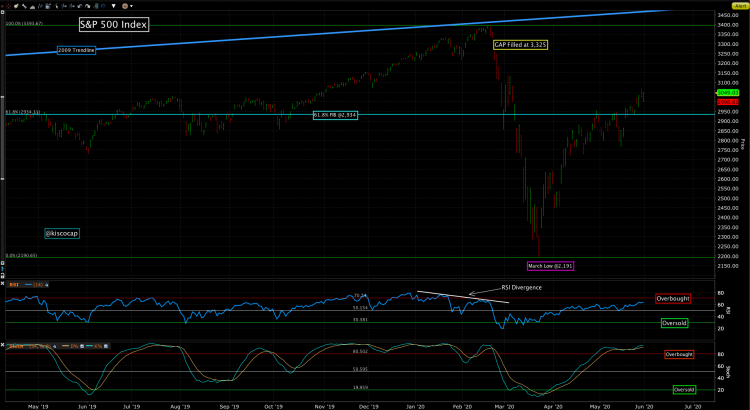 The stock market has refused to re-test the March lows which means that the Trillions in central bank stimulus and bailout programs have buoyed the stock and bond markets. In the chart of the S&P 500 index below, we can see that the 61.8% retracement level has been surpassed which raises the odds that the March low was a bottom despite the massive disconnect from the fundamentals. After going sideways for several weeks in April/May, the indices are breaking-out of this consolidation range and may challenge new highs over the summer months.

The fundamentals of the economy are very challenging but the worse it gets, the more bailout programs get passed. This may all look to get resolved towards the pre-election months in the Fall, by the way. Eventually, the fundamentals need to recover and catch-up or high-yield bonds and stocks will come crashing down to reality.

There was no “Sell In May” event and the seasonality improves over the next several weeks which coincides with many states relaxing COVID-19 protocols. I do expect we will re-visit the risk of the coronavirus in the winter months and I believe that central banks and governments expect this, too. This means that we will see a continuation of bailout packages and central bank bond buying programs until we get a vaccine. From what I read, a vaccine is not realistic until 2021 or maybe longer so we may just have one big market melt-up before there is a reconciliation with the fundamentals. Sounds crazy but there is precedent as equity markets ripped higher in 1999 before a top in March of 2000 after the Fed provided stimulus to counteract the Russian default crisis of 1998. Of course, the amount of stimulus today makes the Fed’s activities in the late 1990s look like child’s play.