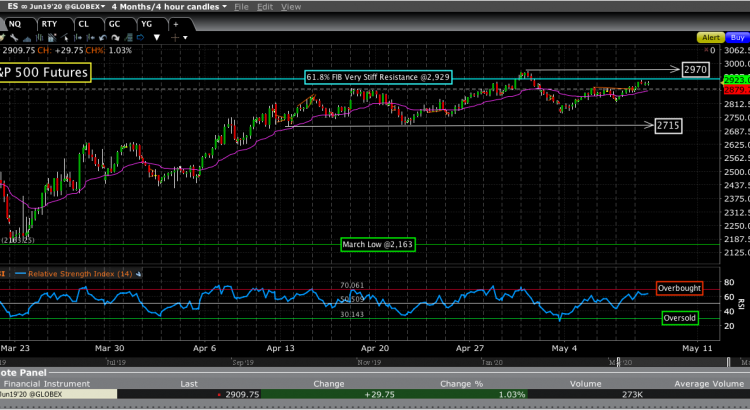 We are on week 5 of going sideways in the S&P 500 with the possibility of moving higher next week. As you will see in the bullet points below, there is plenty of bad news out there as corporations suffer a reduction to revenues and possible solvency issues. Let’s look at a short-term chart that I posted for my clients this week that show equities continue to hold up despite rising bankruptcies and historic job losses. The range of 2970/2715 points where a breakout (up or down) is likely to happen in the coming sessions.

Zooming out to the longer-term chart we see resistance just overhead which the market has to clear to confirm that the March low was THE bottom. Of course, moving through this price zone makes little sense from a fundamental perspective as the effects of shuttering the global economy won’t be fully understood for many months.

SO, why have we re-traced this much and what would be the rationale for a rebound to new highs? Well, the federal government has pumped in $4.5T in stimulus while the Fed is adding at least as much in just a matter of weeks so that creates a sugar-high that elevates risk assets (stocks/high-yield bonds). Equities will likely run out of gas when the stimulus comes to halt which begs the question of how far will they go?

In this last chart, I plotted an index of total debt verses the M2 money supply. This chart highlights the rate of debt growth and to show that there may be a whole lot of money printing in the future as the spread between the two has is likely to converge to the upside. The M2 has already kinked higher in the very right side of the chart so this money creation may just be going back into the stock market resulting in a further disconnect from the reality of weakening fundamentals. We did see Fed stimulus from the 1998 Russian default crisis cause the NASDAQ to double in 1999 so you have to respect that governments and central banks can manipulate the stock market beyond a rational valuation metric. So, that is the case for stocks moving higher, like it or not.

The United States is now at 116% of debt to GDP which enters a territory where economists begin to warn of rising interest rates, inflation and currency devaluation. However, as other countries follow the United States some of these metrics become relative and harder to detect but they eventually emerge in one form or another (think equity prices).