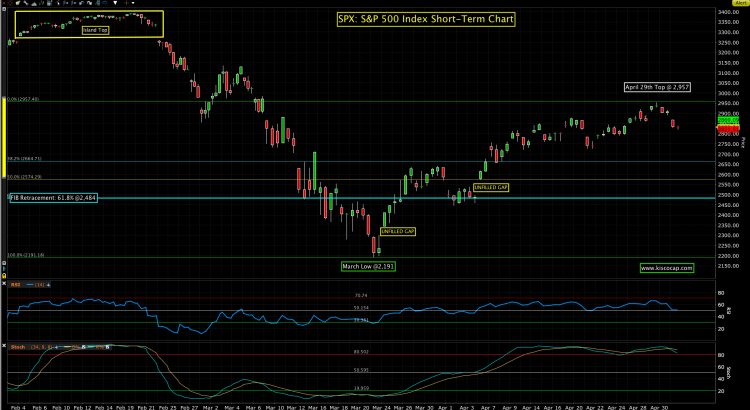 A big news week navigating the Fed, GDP and jobless claims which all indicate a rough year for growth. However, the technical picture in the charts is clear that the rebound wave from the March low is over.

As you can see in this first chart, the S&P 500 peaked with an island top in February and did not find a bottom until March at 2,191. The bounce from that level ended at the 61.8% fibonacci retracement this week – which means the least path of resistance is now lower as we head into May.

In the next chart below, I applied a fibonacci grid from the high this week to the March low. You can observe that the 61.8% support level coincides with a gap in the chart which may act as a magnet later in May. If we lose the 2,484 price zone in the chart, then a re-test of the March low would be a distinct possibility.

The market is wrestling with the timing of when the global economy will return to normalcy but there is no clear path to when that will happen. Even a vaccine created tomorrow for COVID-19 would take well into next year to develop, manufacture and administer to the billions of people who want to be protected. This makes identifying a return to normalcy for global trade impossible to predict – it won’t be anytime soon.

In the meantime, there will be sectors that lose (commercial real estate/travel) and new technologies (video conferencing) that will change how people work together and do business with their customers. The central banks will continue to attempt to inflate risk assets like stocks and high-yield bonds in the coming year. However, a paper recovery would just put the market in a terribly overvalued position that would lead to another big fall down the road. A continued price recovery would also highlight that the real inflation over the last ten years was concentrated in the stock market and not the goods and services traditioanlly purchased by consumers.

That is all for now until and thank you for being a subscriber!