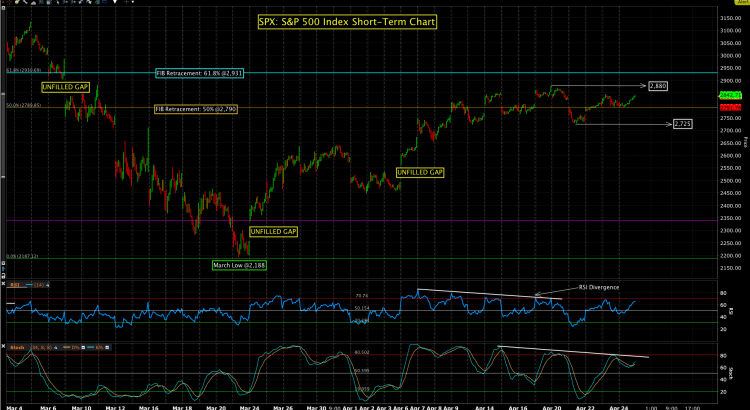 An exciting week in the oil markets this past week as there is no Fed to fight when it comes to delivering a physical commodity like oil. If you own a futures contract on the settlement day then a barrel of oil is delivered to your front door and no, the Fed can’t take delivery . Oil prices are also a great barometer of not just supply dynamics but global economic health and right now the message is not so good. In an amazing fashion, the price of West Texas Crude (WTI) settled at a negative price of $37.63 on Monday! The negative price reflects a dramatic fall in economic activity and means that you had to pay someone to take it off your hands this week. Could we see another negative price on settlement day for the June contract?

The stock market traded marginally lower on the week as the plummet in oil prices was countered by another bailout package from Congress. There are trillions in bailout packages and stimulus programs working through the economy so the equity market is digesting whether this money can buoy prices long enough for a turn-around in economic activity to manifest.

If we look at the three year chart below, there has been one of the sharpest rebounds ever from the March low which has paused over the last two weeks. The S&P is still short of its 61.8% retracement which means that a re-test of the March low is very much a possibility.

If we look at a 3 month chart of the S&P 500, we can observe a few things. First, the two key levels to watch are 2,880/2,725 as the short-term range that needs to be broken to consider the next big leg (up or down) in the S&P. There are also two unfilled gaps below and one above (filled at 2,903) – gaps eventually get filled when you analyze charts, by the way. Finally, the momentum indicators on the bottom indicate a negative divergence as the uptrend runs out of gas.

These places in the charts are tough spots as you can go either way. On one side is the economy at a standstill and on the other is a central bank working with a government to inflate risk assets. We can’t ignore the price of oil and the clarity of its message that things are not good when it comes to global trade.

One last consideration this week is the ratio of the Whilshire Index of 5000 stocks to GDP where we have exceeded the 2000 peak. Can the stimulus programs defy gravity and keep the stock market elevated? Stay tuned as we will get more information this week as we hear from the Fed on Wednesday, get a GDP reading and see earnings reports from 140 companies in the S&P 500.