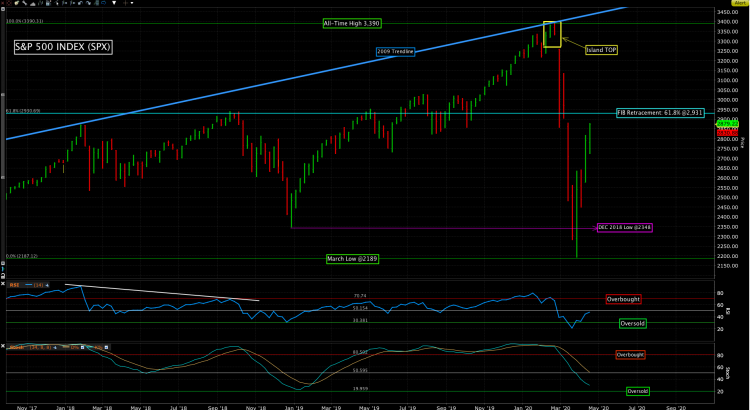 Earnings reports began this week with the banks (see more below) that dramatically increased loan loss reserves as defaults will spike in the coming weeks. The rest of the S&P 500 will kick-off earnings reports next week where we should get more insight unto how companies are dealing with a global economy at a standstill.

The stimulus programs by the Fed and the U.S. Treasury are running at full tilt to fight the collapse of securities prices. However, these programs will only go so far as already I am hearing pundits complain the Fed has overstepped its mandate while the SBA PPP program has already used up all of its $350B in capital. The overwhelming demand for the PPP program illustrates the fallout from shuttering the economy as operating under a pandemic is not in anyone’s risk management playbook.

As you can see the bounce from the March low is very steep and brings hopes of a “V” recovery. The slope of this bounce is higher than any other bounce since the 2009 low (I checked). In other words, don’t bet on it continuing – at least not past the 61.8% FIB (blue line) in the chart below without a major pullback.

The Q1 earnings reports will be rough but only the month of March was affected by the coronavirus which means Q2 will be that much worse. We don’t know the timeline for returning to work but we do know consumer behavior will be changing and that there are many risks to a portfolio when an economy shuts down.

That is all for now and thank you for being a subscriber! Stay safe out there!