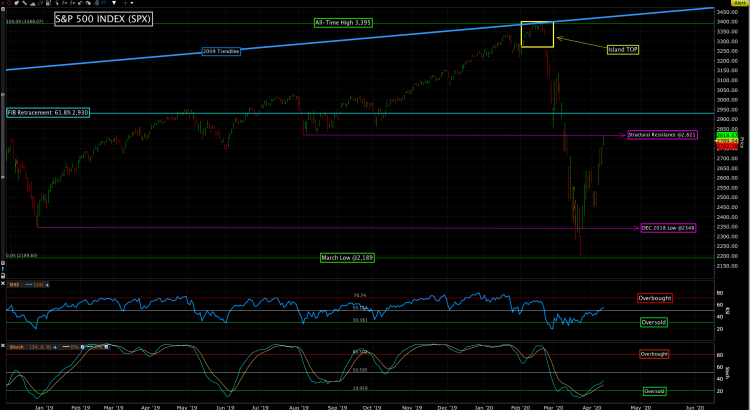 The market crashed in March and its rebound is about to reach heavy resistance as the earnings reports for Q1 start next week. The reaction by the Federal Reserve and US Treasury have been historic as they are providing several trillion dollars of stimulus in a matter of weeks. Is it enough and how will all of this end?

Don’t feel too bad as they don’t know either. The earnings reports over the next several weeks will highlight those companies that have saved for a rainy day and those that borrowed too much and are now a credit risk. There will be much uncertainty from these reports as getting back to business is an unknown until the governments around the world give the all-clear.

In the chart below, I have highlighted two major points of resistance which the market will have to overcome as the earnings reports roll out. If the market fails to break resistance then you will have a new low on the year in the coming months and a longer than expected recession. The next two weeks will be very telling so stay tuned.

That is all for now until next week’s Market Update and Happy Easter to those who are celebrating!