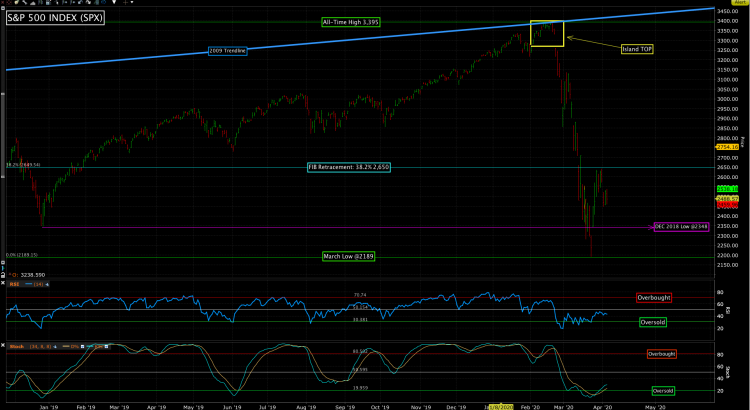 The reality of the coronavirus is setting in as we are finally seeing the hard data that portends a deep recession and a lack of work for the average American. The jobless claims over the last two weeks show 10mm people are out of work which implies a double-digit unemployment rate for April. Next up are earnings reports where we will finally get color from corporate America on how they are handling the stand-still in economic activity. We will learn of capital raising plans and layoffs but I doubt you’ll hear guidance that everything will go back to “normal” come summertime.

We have re-tested the December 2018 low in March and now we wait to see if it will hold or make a new low as the coronavirus hits an apex this month. In the meantime, Wall Street wrestles with a quick rebound of the economy verses a longer downturn. Keep in mind that earnings growth was flat in 2019 for the S&P 500 with a weakening trend meaning the overall fundamentals were on a decline before the coronavirus.

The equity market has also been buoyed by a multitude of stock buyback programs (in the trillions) which will go away as companies preserve capital and fortify their balance sheets. We also don’t know how consumer behavior will change as saving for a rainy day may be en vogue while working from home and re-locating to less populated areas could re-shuffle the economy. A lot to consider for the month of April.

I will be watching for signs of credit stress in the coming weeks as liquidity is challenged and leverage is high. The ripple effect of the coronavirus is unknown but it has the potential to change how people live their lives and how companies allocate their capital in the coming years.

Among the hardest-hit areas of the economy was the accommodation and food services sector, which comprised more than half of the month’s net losses. Businesses that prepare meals, snacks and beverages for customers for either on-premise (sit-down restaurants and bars) or off-premise (delivery and take-out) consumption saw payrolls slide by 417,000.

That is all for now until next week’s Market Update and thank you for being a subscriber!