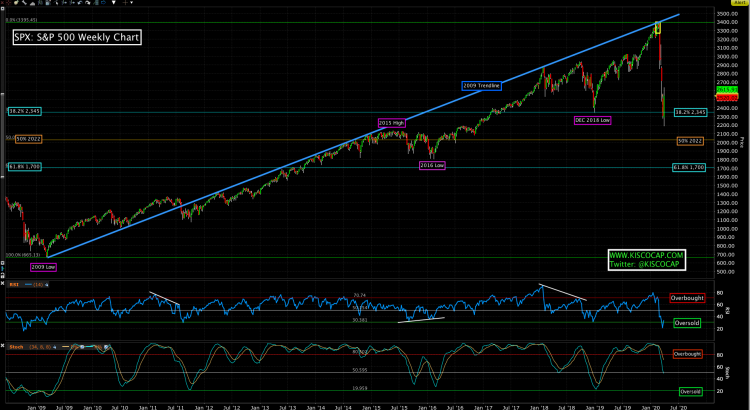 The coronavirus is shaping up to be a game changer for the capital markets of the United States. Not only has the Fed unleashed the Kraken with unlimited amounts of quantitative easing but Congress has passed a multi-trillion sized stimulus package to keep consumers and corporations afloat through the government mandated shut-down of the economy. The government and/or the Fed is now going to be in charge of funneling money towards Treasuries, mortgage-backed securities, commercial paper, municipal bonds, corporate debt and small business lending.

Consumers will get a lifeline with added unemployment benefits and helicopter money which is the most valuable piece of the legislation as it keeps food on the table and a lid on social unrest. But why all this other stuff? Can’t companies find their own liquidity by selling ownership stakes in their companies or their banking relationships? Warren Buffet has $128B in cash ready to go for this sort of scenario. On the flip-side, is it fair to ask them to do this in a government mandated shut-down? And what terms are fair on this type of deal and does it really preserve labor if we fall into a prolonged recession?

Unfortunately, many publicly traded companies have spent the last 10 years issuing debt to buy-back their stock so there is a dearth of fortress balance sheets to withstand a sharp recession. And that is why the new law has a $500B corporate slush fund that will be deployed wherever it is necessary. In fact, the Fed will be using this money in a new lending facility that will be leveraged to potentially unleash several trillion dollars of loans into the private sector. Would you take this money?

I suppose if you were desperate you would have to and if you had a fortress balance sheet you wouldn’t want to touch it. In the financial crisis, banks were more or less forced to take the money as an industry in a show of solidarity but that will not be the case in 2020. What company wants the stigma of taking this capital and risk being raked over the coals by Congress two years from now? Any takers? Airlines? Car manufacturers?

Perhaps this lending facility will be oversubscribed in a feeding frenzy or maybe only the weakest companies will show-up. In either case, the market will not show deference to the companies now holding tax-payer money despite the circumstances of the coronavirus. The politicians issuing this capital may not be the same people after the November election so the stakes on who runs the show after the next election are now more elevated than ever for the bailout companies. I can see a new regulatory regime developing on the heels of these facilities so this will be a new topic of debate in the upcoming election.

So, the Fed’s wealth generator has a problem and their latest stimulus programs are more triage than fuel for the perpetual motion machine that we call the stock market. The S&P has made a major top in 2020 and now there is a struggle to rebound despite the bailout news. The media has embraced the latest bounce as the “greatest 3 day rally since 1931” but what they fail to tell you is that the stock market dropped 60% afterwards before bottoming in 1932.

In the chart below, the S&P needs to rally above 2,800 before considering a recovery to new all-time highs – the “all-clear” level. Currently, the risk is that we see additional downside and new lows as the bounce this week looked corrective. The Fibonacci retracement levels below are logical places for the next stop (2022/1700).