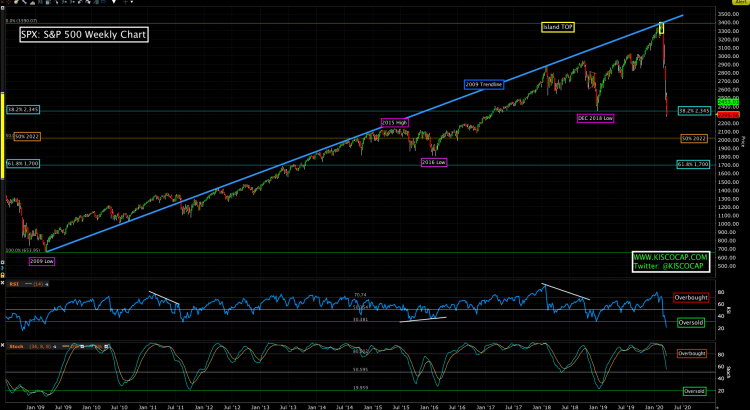 The throes of a bear market are upon us and it is now apparent to everyone that the equity markets have completed a multi-year uptrend. Perhaps you are aware that this top was inevitable or maybe you think it is a temporary stain that will be wiped away once a vaccine is created. Market cycles are inevitable and they always end with a crash once the market awakens to the bag they are holding. Unfortunately, it took a virus to pop this bubble so once again for the third time in 20 years we have an unprecedented circumstance surrounding a major market top.

So, what happens next? As I write this post, I am reading that the stimulus package being negotiated in the Senate is worth $2T (10% of GDP) according to Larry Kudlow (WH Economic Advisor) so the rescue packages will keep coming. Is this short-term good and long-term bad? Exploding deficits create a conondrum for this situation as the stimulus is needed to keep the economy afloat but the longer term effects are higher interest rates, taxes and inflation – you can read more about this economic concept HERE.

Economists debate the long-term effects of spending policies but it is all how things are managed after the crisis abates. If Congress is business friendly in the recovery period, they can use the private sector to restore growth and lower unemployment. This would make the spending efforts well worth the money, however, this phase likely for won’t happen until 2021 or beyond.

In the meantime, the markets are pricing in the dramatic drop in growth and increased credit risk as many companies will have difficulty re-paying their debt. Earnings reports are two weeks away where the reality of an economy being halted will be front and center.

As you can see in the chart below, the S&P is searching for a support level and may have lost one on Friday. The Fibonacci grid I have drawn shows re-tracement levels where stocks typically find support and signs of a reversal. The 38.2% level aligns perfectly with the December 2018 low which is a significant pivot in the chart. If you remember, this is when the Fed began to lower interest and signal the end to their very short-lived tightening cycle. Unfortunately, this level did not hold on Friday which opens up the door to the next two lower retracement levels. An ugly technical picture, for sure.

If we look at the same set-up for the tech heavy NASDAQ, we see that its 38.2% still has a bit more to go in the coming sessions.

And the Dow Jones Index may be foreshadowing the next move for the S&P 500 and NASDAQ. You can see below that it has sliced through its 38.2% with no signs of a reversal.

It will continue to be a very difficult trading environment as the market does not know how to price a systemic halt to economic activity. Expect more programs and interventions from central banks and governments until the stock market stabilizes.